The Story Of Washing Soda

Washing soda finds its application in numerous ways, be it from household uses to a vast range of industrial applications. It is an alkaline compound with a high alkaline character which has the capability to remove adamant stains from clothes during washing. Washing soda formula is written as Na2CO3.10H2O. The chemical name of washing soda is sodium carbonate. Chemically soda ash is a hydrated salt of sodium carbonate. 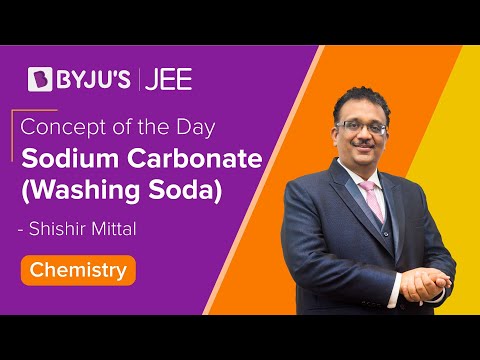 Steps involved in the manufacture of sodium carbonate are explained below:

In a carbonate tower, carbon dioxide is passed through an ammoniated brine solution.

Sodium Bicarbonate (NaHCO3) formed is obtained from the tower and is heated at a temperature of 300°C. Hence, formations of sodium carbonate take place.

Ammonia can be recovered by treating the solution of NH4Cl with Ca (OH)2. This ammonia is again used in the Solvay process and CaCl2 is obtained as a by-product.

Get associated with the family of BYJU’S to understand the concepts in-depth with the help of an expert faculty.

1. What is the chemical formula of washing soda?

3. The process by which sodium carbonate is obtained is called _______.

4. Mention the four steps involved in the preparation of sodium carbonate.

Ans: The four steps involved in the preparation of sodium carbonate are:

Ans: It is used in the process of softening of water and paper industry.

Test your knowledge on The Story Of Washing Soda Na2
Q5