Propane tanks are extensively used in the kitchen. It’s not enjoyable, however, to discover you’ve run out of gas halfway through a meal. On a hot day, gauges are used to measure the pressure inside gas tanks that read greater than on a cool day. When deciding whether or not to replace the tank before your next cookout, keep the air temperature in mind. In this article, we’ll go over Gay Lussac’s Law in detail, including its formula and derivation.

What is Gay-Lussac’s Law?

This law was formulated by the French chemist Joseph Gay-Lussac in the year 1808. The mathematical expression of Gay-Lussac’s law can be written as follows:

The relationship between the pressure and absolute temperature of a given mass of gas (at constant volume) can be illustrated graphically as follows.

From the graph, it can be understood that the pressure of a gas (kept at constant volume) reduces constantly as it is cooled until the gas eventually undergoes condensation and becomes a liquid. 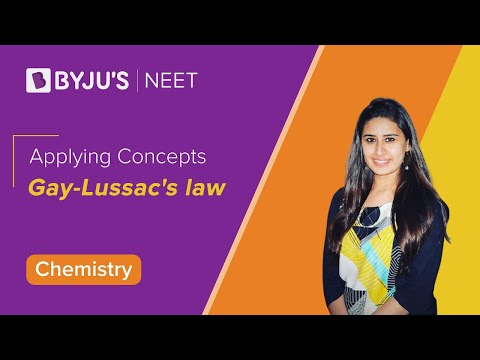 This expression can be derived from the pressure-temperature proportionality for gas. Since P ∝ T for gases of fixed mass kept at constant volume:

When a pressurized aerosol can (such as a deodorant can or a spray-paint can) is heated, the resulting increase in the pressure exerted by the gases on the container (owing to Gay-Lussac’s law) can result in an explosion. This is the reason why many pressurized containers have warning labels stating that the container must be kept away from fire and stored in a cool environment.

An illustration describing the increase in pressure which accompanies an increase in the absolute temperature of a gas kept at a constant volume is provided above. Another example of Gay-Lussac’s law can be observed in pressure cookers. When the cooker is heated, the pressure exerted by the steam inside the container increases. The high temperature and pressure inside the container cause the food to cook faster.

The pressure of a gas in a cylinder when it is heated to a temperature of 250K is 1.5 atm. What was the initial temperature of the gas if its initial pressure was 1 atm?

What is Gay Lussac’s law formula?

The law of Gay-Lussac is a variant of the ideal gas law where the volume of gas is held constant. The pressure of a gas is directly proportional to its temperature while the volume is kept constant. P / T = constant or Pi / Ti = Pf / Tf are the standard calculations for Gay-Lussac ‘s law.

Charles law states that the volume of an ideal gas is directly proportional to the absolute temperature at constant pressure.

What is the importance of Gay Lussac’s law?

The meaning of this gas law is that it illustrates that rising a gas’s temperature induces a relative increase in its pressure (assuming that the volume does not change). Likewise, reducing the temperature allows the strain to decrease proportionally.

How does Avogadro’s law apply to everyday life?

Avogadro’s law states that the total number of atoms/molecules of gas (i.e.the amount of gaseous substance) is directly proportional to the volume  occupied by gas at constant temperature and pressure. You are driving more molecules of gas into it when you blow up a football.

What are the applications of Avogadro’s law?

To learn more about Gay-Lussac’s law and other gas laws, such as Charles’ law,  register with BYJU’S and download the mobile application on your smartphone.