What is Boyle’s Law?

Boyle’s law is a gas law which states that the pressure exerted by a gas (of a given mass, kept at a constant temperature) is inversely proportional to the volume occupied by it. In other words, the pressure and volume of a gas are inversely proportional to each other as long as the temperature and the quantity of gas are kept constant. Boyle’s law was put forward by the Anglo-Irish chemist Robert Boyle in the year 1662. 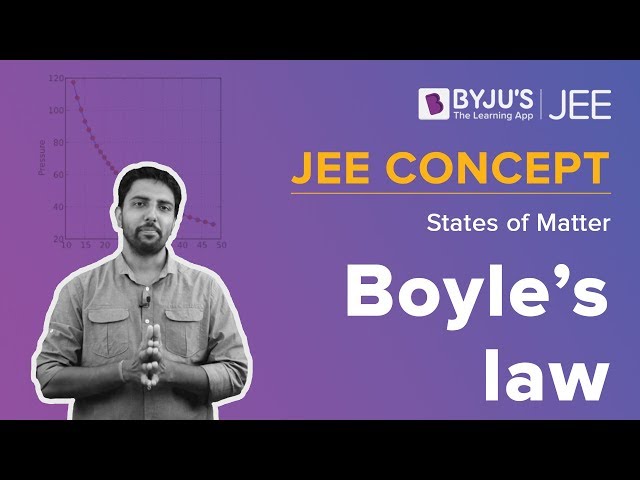 For a gas, the relationship between volume and pressure (at constant mass and temperature) can be expressed mathematically as follows.

Where P is the pressure exerted by the gas and V is the volume occupied by it. This proportionality can be converted into an equation by adding a constant, k.

The pressure v/s volume curve for a fixed amount of gas kept at constant temperature is illustrated below.

As per Boyle’s law, any change in the volume occupied by a gas (at constant quantity and temperature) will result in a change in the pressure exerted by it. In other words, the product of the initial pressure and the initial volume of a gas is equal to the product of its final pressure and final volume (at constant temperature and number of moles). This law can be expressed mathematically as follows:

This expression can be obtained from the pressure-volume relationship suggested by Boyle’s law. For a fixed amount of gas kept at a constant temperature, PV = k. Therefore,

This equation can be used to predict the increase in the pressure exerted by a gas on the walls of its container when the volume of its container is decreased (and its quantity and absolute temperature remain unchanged).

If a scuba diver rapidly ascends from a deep zone towards the surface of the water, the decrease in the pressure can cause the gas molecules in his/her body to expand. These gas bubbles can go on to cause damage to the diver’s organs and can also result in death. This expansion of the gas caused by the ascension of the scuba diver is another example of Boyle’s law. Another similar example can be observed in the deep-sea fish that die after reaching the surface of the water (due to the expansion of dissolved gasses in their blood).

A fixed amount of a gas occupies a volume of 1L and exerts a pressure of 400 kPa on the walls of its container. What would be the pressure exerted by the gas if it is completely transferred into a new container having a volume of 3 liters (assuming the temperature and quantity of gas remains constant)?

Therefore, the gas exerts a pressure of 133.33 kPa on the walls of the 3-liter container.

A gas exerts a pressure of 3 kPa on the walls of container 1. When container 1 is emptied into a 10-liter container, the pressure exerted by the gas increases to 6 kPa. Find the volume of container 1. Assume that the temperature and quantity of the gas remain constant.

Therefore, the volume of container 1 is 20 L.

How does Boyle’s law work?

Boyle’s law is a gas law that states that a gas’s pressure and volume are inversely proportional. When the temperature is kept constant, as volume increases, pressure falls and vice versa.

Why is Boyle law important?

Boyle’s law is significant because it explains how gases behave. It proves beyond a shadow of a doubt that gas pressure and volume are inversely proportional. When you apply pressure on a gas, the volume shrinks and the pressure rises.

What is the formula for Boyle’s gas law?

The empirical relation asserts that the pressure (p) of a given quantity of gas changes inversely with its volume (v) at constant temperature; i.e., pv = k, a constant, as proposed by physicist Robert Boyle in 1662.

What is a good example of Boyle’s Law?

Can Boyle’s law be experimentally proven?

Boyle’s law is a connection between pressure and volume. It asserts that under constant temperature, the pressure of a specific quantity of gas is inversely proportional to its volume. It is possible to prove the law empirically. The paper discusses a syringe-based experimental approach for verifying the law.

To learn more about Boyle’s law and other important gas laws, such as Charles’ law, register with BYJU’S, and download the mobile application on your smartphone.