Hell Volhard Zelinsky Reaction Mechanism is quite different from other halogenation reactions as it takes place in the absence of a halogen carrier. The reaction is used for the halogenation of carboxylic acids at the alpha carbon. This reaction is named after the chemists – Carl Magnus Von Hell, Jacob Volhard and Nikolay Zelinsky. The reaction is initiated by the addition of phosphorus tribromide (catalytic amount) and the further addition of one molar equivalent of diatomic bromine.

The reaction conditions for the hell volhard zelinsky reaction are quite severe- involving reaction temperatures above 373 K and increased reaction time. The reaction usually requires less than one equivalent of phosphorous (or a trihalide of phosphorous). Some carboxylic acids and acid derivatives such as acyl halides or anhydrides can be halogenated in the absence of a catalyst. An example of the HVZ Reaction is given below.

The HVZ reaction fails to accomplish the fluorination and iodination of carboxylic acids. If the Hell Volhard Zelinsky reaction is conducted at extremely high temperatures, there may be an elimination of hydrogen halide from the product, thereby resulting the formation of beta unsaturated carboxylic acids. 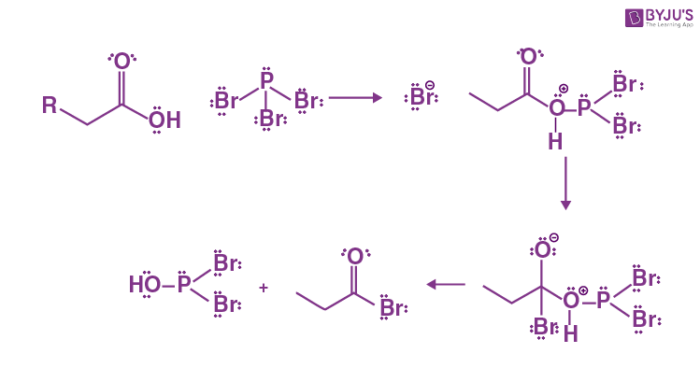 The hydrogen bromide donates a proton to the carbonyl oxygen. The resulting bromide ion formed is a weak base and therefore captures the hydrogen which was in the alpha position. The extra electron is used to form a double bond with the adjacent carbon and push the pi electrons of the carbon-oxygen double bond towards the oxygen. The positive charge of the oxygen is removed. Since the bromide ion recaptures a hydrogen, the catalyst is regenerated. Thus, the keto-enol tautomerization of the carboxylic acid achieved.

The oxygen in the enol form puts forth an electron pair to form a double bond with the carbon. The existing carbon-carbon double bond then attacks a bromine atom and thus, the bromination of the enol at the alpha carbon occurs. The bromide ion also removes the hydrogen bonded to the oxygen atom and forms another hydrogen bromide molecule which evaporates from the system due to the absence of water.

With the addition of water, the acyl bromide is hydrolyzed to the carboxylic acid. The oxygen from water attacks the carbonyl group, forming an intermediate. When the reformation of the carbonyl group occurs the bromide ion is expelled (due to the high reactivity of acyl bromide, it is a good leaving group). The water removed hydrogen then moves back into the carboxylic acid as shown below.

Thus, the given carboxylic acid is halogenated at the alpha carbon. Click here to learn about more named reactions in organic chemistry.