Thermodynamics is a vital branch of physics and chemistry. It is concerned with the study of energy, the conversion of energy between different forms, and energy’s ability to do work.

Thermodynamics is concerned with the concepts of heat and temperature, as well as the interaction of heat and other forms of energy. The behaviour of these quantities is governed by the four laws of thermodynamics, which provide a quantitative description.

Q1. Under what conditions the heat evolved or absorbed is equal to the internal energy change?

Answer. The heat evolved or absorbed is equal to the internal energy change at constant volume.

Q2. Why enthalpy of neutralization of HF is greater than 57.1 kJ mol–1?

Answer. This is due to the high hydration energy of fluoride ions.

Answer. A cyclic process is one in which the initial and final states are the same. It is a series of processes that end with the system in the same state in which it began.

Q4. Name two intensive and extensive properties of a system.

Answer. The intensive and extensive properties are as follows:

Q5. Which of the following statements is correct?

Correct Answer: (c) The presence of reactants in a closed vessel made up of copper is an example of a closed system.

Explanation: There is no exchange of matter in a closed system (for example, the presence of reactants in a closed vessel made of conducting material, such as copper), but there is an exchange of energy between the system and its surroundings.

Q6. What are the applications of Hess’s Law of constant heat summation?

Q7. What are heat capacities at constant volume and constant pressure? What is the relationship between them?

Cp – Cv = R is the relationship between Cp and Cv.

Q8. (i) For a reaction both ΔH and ΔS are negative. Under what conditions does the reaction occur spontaneously?

(ii) For a reaction both ΔH and ΔS are positive. Under what conditions does the reaction occur spontaneously?

For a reaction to be spontaneous ΔG should be negative.

(i) Both ΔH and ΔS are negative, ΔG can be negative only if TΔS < ΔH in magnitude.

This is possible only if either ΔH has a large negative value or T is so low that TΔS < ΔH.

(ii) Both ΔH and ΔS are positive so ΔG will be negative only if TΔS > ΔH in magnitude.

Thus either ΔS should be very large so that even if T is low, TΔS is greater than ΔH, or if ΔS is small, T should be high so that TΔS > ΔH.

Q9. How will you get to the relationship qp = qv+ ΔngRT?

Answer: The relationship can be derived as follows-

Enthalpy change ΔH = qp, where qp is the heat change at constant pressure,

Q10. Calculate the maximum work obtained when 0.75 mol of an ideal gas expands isothermally and reversible at 27°C from a volume of 15 L to 25 L.

For an isothermal reversible expansion of an ideal gas

Q11. Calculate the enthalpy of formation of carbon disulfide given that the enthalpy of combustion of it is 110.2 kJ mol–1 and those of sulfur and carbon are 297.4 kJ and 394.5 kJ/g atoms respectively.

Q12. Calculate the work done when 2 moles of an ideal gas expand reversibly and isothermally from a volume of 500 ml to a volume of 2 L at 25°C and normal pressure.

(i) Standard enthalpy of formation.

(i) Standard enthalpy of formation.

The change in enthalpy when one mole of a compound is formed from its elements in their standard states under standard conditions, i.e. at 298K and 101.3kPa pressure, is referred to as the standard enthalpy of formation.

The enthalpy change when one mole of a compound is completely burned in oxygen with all reactants and products in their standard state under standard conditions is defined as standard enthalpy of combustion (298K and 1 bar pressure).

This is the enthalpy change that occurs when one mole of a substance is completely broken down into its atoms in the gas phase.

Q15. 1 g or graphite is burnt in a bomb calorimeter in excess of oxygen at 298 K and 1 atm pressure according to the reaction

During the reaction, the temperature rises from 298 K to 299 K. If the heat, the capacity of the bomb calorimeter is 20.7 kJ K-1 what is the enthalpy change for the above reaction at 298 K and 1 atm?

q = Heat change = Cv × ΔT, where q is the heat absorbed by the calorimeter.

The quantity of heat from the reaction will have the same magnitude, but the opposite sign, because heat lost by the system (reaction mixture) is equal to the heat gained by the calorimeter.

Here, the negative sign indicates the exothermic nature of the reaction.

For combustion of 1 mol of graphite

Q2. A hot object is placed next to a cold object so that they are touching. Which of the following statements is true?

II. The two objects are in thermal equilibrium 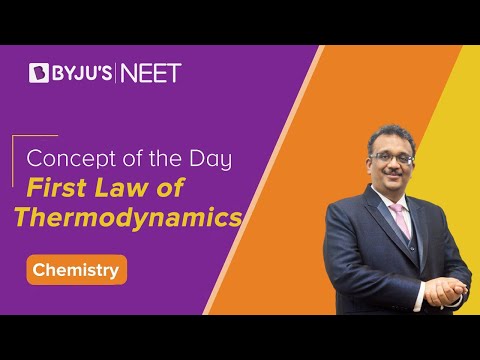