Hoffmann bromamide reaction mechanism generally includes the use of an alkali as a strong base to attack the amide, leading to the deprotonation and the subsequent generation of an anion. This reaction is used for the conversion of a primary amide to a primary amine with one less carbon atom. This is accomplished by heating the primary amide with a mixture of a halogen (chlorine or bromine), a strong base, and water. The reaction can be illustrated as follows.

Here are a few examples of the Hoffmann bromamide reaction:

Step 1 – The hydroxide ion of the strong base attacks the amide. The amide is now deprotonated leading to the formation of water and the anion of the amide.

Step 2 – The anion now attacks the diatomic bromine in an alpha substitution reaction. The bromine-bromine bond breaks and N-Bromamide is formed along with Br- anion.

Step 3 – The N-Bromamide is now attacked again by the base, leading to its deprotonation and the formation of water along with the generation of bromamide anion.

Step 4 – This bromamide anion goes through rearrangement in a way that the ethyl group (or any R- group) which is bonded with the carbonyl carbon now bonds with the nitrogen instead. Simultaneously, the bromide anion formed leaves the compound. This leads to the formation of an isocyanate.

Step 5 – The addition of water to the isocyanate leads to the formation of carbamic acid in a nucleophilic addition reaction.

Step 6 – The carbamic acid now loses carbon dioxide, giving a negatively charged nitrogen bonded to one hydrogen and the ethyl group. When this is protonated by the water, the required primary amine is formed.

The Hoffmann bromamide reaction mechanism is illustrated below: 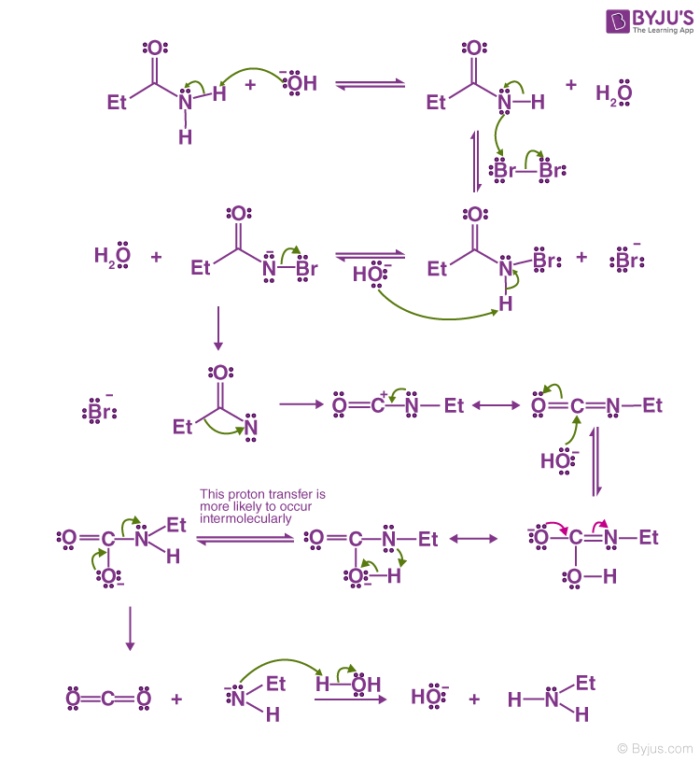 Thus, the primary amide is converted to a primary amine with one less carbon.

Take up a quiz on Hoffmann Bromamide Reaction
Q5