When an organic compound with one or more hydrogen atoms of the ammonia molecule is replaced with an alkyl or even an aryl group, these compounds are classified as amines.

These are carbon atoms which are bonded to the nitrogen atom and their bond is quite strong.

Amines are similarly divided into 3 different types; which are:

Amines usually have particularly distinct properties about them, such as their characteristic odours. These odours usually that of rotting eggs or fishes. Aliphatic amines are amines that are less dense than water and are usually stronger bonds of ammonia than aromatic amines. The major industrial applications are in making rubber, dyes, pharmaceuticals and synthetic resins and fibres. Certain tests are carried out for the identification of primary amines, secondary amines, and tertiary amines. One of the most popular tests is Hinsberg test and the reaction produced from this test is called the Hinsberg reaction.

A chemical test that is most commonly used for the identification of primary, secondary and tertiary amines is called the Hinsberg test. An amine in the presence of an aqueous alkali interacts with a Hinsberg reagent. Thus, this is what is meant as the Hinsberg test. After the reaction, the following observations are observed:

Getting a primary amine to react with a Hinsberg reagent usually leads to an amide being formed, called N-ethylbenzenesulphonyl amide, whereas the reagent used is called benzene sulfonyl chloride. This is strongly acidic as the hydrogen that is attached as a part of the nitrogen compound. Thus, this solution is also soluble in alkali.

Thus, Hinsberg test is effective for the identification of primary amines, secondary amines, and tertiary amines. Amines are usually used for a variety of different purposes such as a variety of different medicines and photographs. Apart from this, the amine is also used for the synthesis of rocket propellants and insecticides. Thus, amines have a whole host of different uses in the industry along with their traditional chemical uses. It is also used in heavy-duty military functions such as the creation of synthetic fibres, used in the production of Kevlar, which is the key component in creating helmets and bulletproof vests for protection of soldiers in warfare. 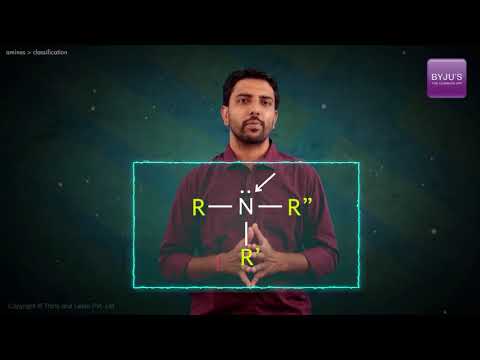 What is a primary amine group?

An amine in which the amino group is directly bonded to one carbon of any hybridization which cannot be a carbonyl group carbon. X = any atom but carbon; usually hydrogen.

Is NH2 a primary amine?

Amines in the IUPAC system: the “e” ending of the alkane name for the longest chain is replaced with amine. More complex primary amines are named with -NH2 as the amino substituent.

What is an amine used for?

Amines are used in making azo-dyes and nylon apart from medicines and drugs. They are widely used in developing chemicals for crop protection, medication and water purification.

Why is amine so important?

Amines play an important role in the survival of life – they are involved in the creation of amino acids, the building blocks of proteins in living beings. Many vitamins are also built from amino acids. Serotonin is an important amine that functions as one of the primary neurotransmitters for the brain.

What is a basic amine? Is amine flammable?

Amines, phosphines, and pyridines are generally high-boiling liquids or solids at room temperature and are combustible, but not highly flammable. The combustion of amines yields noxious NOx gases.

For the detailed discussion on identification of primary amines, secondary amines, and tertiary amines, please download BYJU’S – The Learning App.