What is Perkin Reaction?

Perkin Reaction is an organic chemical reaction which was discovered by William Henry Perkin, an English chemist. This reaction yields an α, β -unsaturated aromatic acid.

Perkin’s reaction mechanism includes the reaction between aromatic aldehydes, the aliphatic acid anhydride, and the alkali salt of the acid to give cinnamic acid derivatives. The Perkin reaction is an organic chemical reaction named after its discoverer – William Henry Perkin.

Given below is an illustration of the Perkin reaction.

Under the influence of the base, the anhydride gives the carbanion. This carbanion now attacks the carbonyl carbon of the aldehyde.

This attack yields an intermediate. The abstraction of a proton from the active methyl group of the intermediate by the given base and the subsequent elimination of the hydroxyl group gives unsaturated anhydride.

This product is now hydrolyzed to finally give alpha, beta-unsaturated acid. The illustration of the Perkin reaction mechanism is given below. 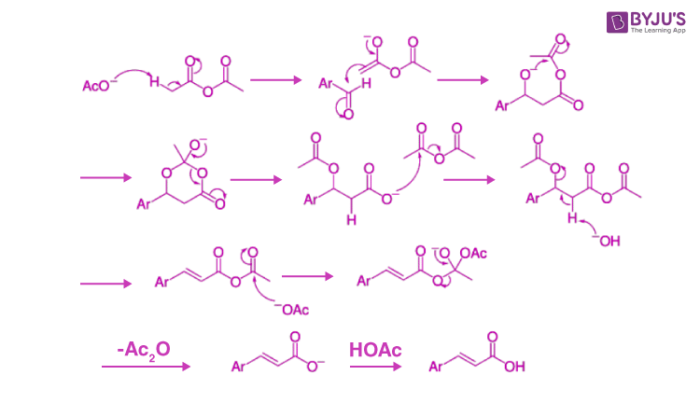 It is important to note that the above-given mechanism is not universally accepted, as there are many other variations to the mechanism of Perkin reaction. One of these other mechanisms includes decarboxylation without the transfer of an acetyl group.

A1: It is an organic chemical reaction that involves the aldol condensation of an organic acid anhydride and an aromatic aldehyde to yield an ɑ, 𝛃-unsaturated aromatic acid.

Q2: What catalysts are used in the Perkin reaction?

A2: The alkali salt of the acid anhydride is used as a catalyst. However, other bases can be used for this purpose.

Q3: What are the applications of this named reaction?

A3: This reaction is used for the synthesis of phytoestrogenic stilbene resveratrol in the laboratory.

To learn more about the Perkin reaction and other named reactions in organic chemistry, such as the Hell-Volhard-Zelinsky halogenation reaction, Register with BYJU’S and download the mobile application on your smartphone.