Decarboxylation reaction is defined as a chemical reaction that eliminates a carboxyl group and liberates carbon dioxide (CO2). Decarboxylation mostly refers to a reaction of carboxylic acids erasing a carbon atom from a chain of carbons. Carboxylation is a completely reversible process which is the first chemical step in photosynthesis, where CO2 is added to the compound. Whereas, Enzymes that catalyse decarboxylation are known as decarboxylases.

The most important carbon-carbon bond forming and breaking in biological chemistry encompasses gain or loss of a single carbon by an organic molecule in the form of CO2. You must have seen an equation like this in one of the introductory biology class.

It describes the photosynthetic process by which plants harness energy from sunlight to produce glucose from individual molecules of carbon dioxide. The main step wherein the carbon dioxide is fixed (condensed with an organic molecule) is known as carboxylation reaction.

You must also be familiar with the reverse chemical equation:

The above chemical reaction describes what occurs in respiration, i.e, the oxidative breakdown of glucose to form water, carbon dioxide, and energy. Every carbon atom of glucose is converted into CO2 molecules in the course of transformation. The main step where a carbon atom breaks off from a larger organic molecule is known as decarboxylation reaction. The major decarboxylation stage in the conversion of glucose to carbon dioxide takes place in the citric acid cycle and the pentose phosphate pathway.

Carboxylic acids that consist of a carbonyl group two carbon atoms can lose carbon dioxide readily by heating above 150oC.

Many carboxylic acids do not lose CO2 in this manner because it forms an unstable carbanion. But when a carbonyl exists, and enroll can be formed over two carbons whose resonance is stabilized.

The reaction is described as shown below: 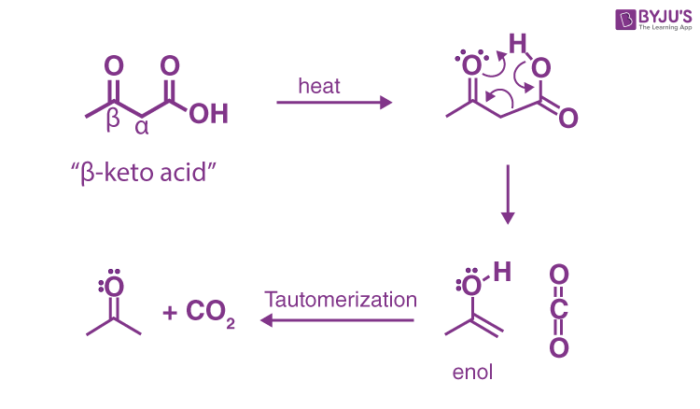 You can notice that this kind of molecules or the beta-keto acids can be obtained through Claisen condensation.