What is a Metallic Bond?

‘Metallic bond’ is a term used to describe the collective sharing of a sea of valence electrons between several positively charged metal ions.

Metallic bonding is a type of chemical bonding and is responsible for several characteristic properties of metals such as their shiny lustre, their malleability, and their conductivities for heat and electricity.

The factors that affect the strength of a metallic bond include:

An illustration describing the way electrons are delocalized over a rigid lattice of metal ions in a metallic bond is provided below. 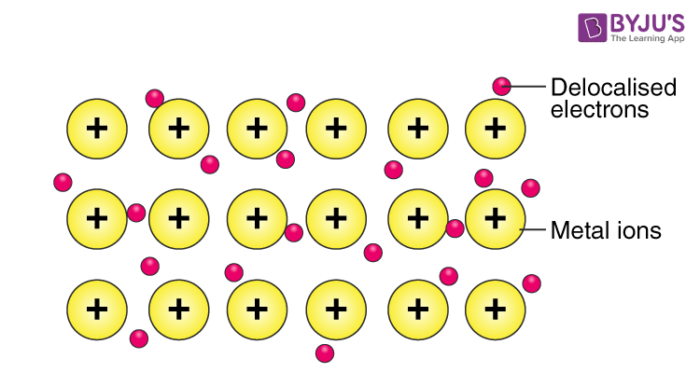 The electron configuration of sodium is 1s22s22p63s1; it contains one electron in its valence shell. In the solid-state, metallic sodium features an array of Na+ ions that are surrounded by a sea of 3s electrons. However, it would be incorrect to think of metallic sodium as an ion since the sea of electrons is shared by all the sodium cations, quenching the positive charge.

An illustration describing the metallic bonding in sodium is provided below. 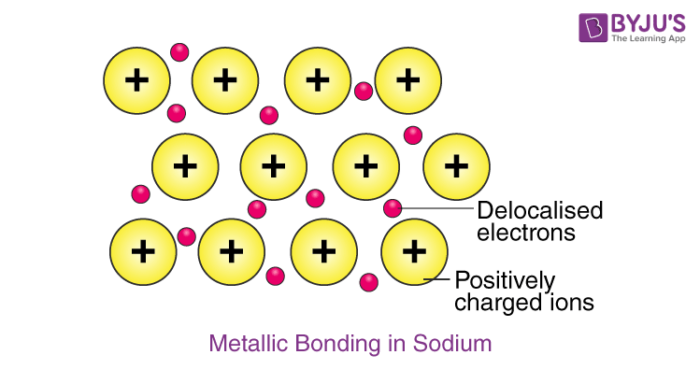 The softness and low melting point of sodium can be explained by the relatively low number of electrons in the electron sea and the relatively small charge on the sodium cation. For example, metallic magnesium consists of an array of Mg2+ ions. The electron sea here contains twice the number of electrons than the one in sodium (since two 3s electrons are delocalized into the sea). Due to the greater magnitude of charge and the greater electron density in the sea, the melting point of magnesium (~650oC) is significantly higher than that of sodium.

Metallic bonds impart several important properties to metals that make them commercially desirable. Some of these properties are briefly described in this subsection.

Electrical conductivity is a measure of the ability of a substance to allow a charge to move through it. Since the movement of electrons is not restricted in the electron sea, any electric current passed through the metal passes through it, as illustrated below.

When a potential difference is introduced to the metal, the delocalized electrons start moving towards the positive charge. This is the reason why metals are generally good conductors of electric current.

The thermal conductivity of a material is a measure of its ability to conduct/transfer heat. When one end of a metallic substance is heated, the kinetic energy of the electrons in that area increases. These electrons transfer their kinetic energies to other electrons in the sea via collisions.

The greater the mobility of the electrons, the quicker the transfer of kinetic energy. Due to metallic bonds, the delocalized electrons are highly mobile, and they transfer the heat through the metallic substance by colliding with other electrons.

When an ionic crystal (such as sodium chloride crystal) is beaten with a hammer, it shatters into many smaller pieces. This is because the atoms in the crystals are held together in a rigid lattice that is not easily deformed. The introduction of a force (from the hammer) causes the crystal structure to fracture, resulting in the shattering of the crystal.

In the case of metals, the sea of electrons in the metallic bond enables the deformation of the lattice. Therefore, when metals are beaten with a hammer, the rigid lattice is deformed and not fractured. This is why metals can be beaten into thin sheets. Since these lattices do not fracture easily, metals are said to be highly ductile.

When light is incident on a metallic surface, the energy of the photon is absorbed by the sea of electrons that constitute the metallic bond. The absorption of energy excites the electrons, increasing their energy levels. These excited electrons quickly return to their ground states, emitting light in the process. This emission of light due to the de-excitation of electrons attributes a shiny metallic lustre to the metal.

As a result of powerful metallic bonding, the attractive force between the metal atoms is quite strong. In order to overcome this force of attraction, a great deal of energy is required. This is the reason why metals tend to have high melting and boiling points. The exceptions to this include zinc, cadmium, and mercury (explained by their electron configurations, which end with ns2).

The metallic bond can retain its strength even when the metal is in its melt state. For example, gallium melts at 29.76oC but boils only at 2400oC. Therefore, molten gallium is a non volatile liquid.

What is the Difference Between Metallic Bonding and Ionic Bonding?

Ionic bonds involve the transfer of electrons between two chemical species. They arise from a difference in the electronegativities of the bonded atoms. On the other hand, metallic bonds are formed when a rigid, definite lattice of metal cations share a sea of delocalized valence electrons. However, both these types of bonding involve electrostatic forces of attraction.

What are the Factors Affecting the Strength of Metallic Bonds?

The three factors are:

Thus, the electron configuration of the element can be studied to predict the strength of the metallic bonding in it.

Which Properties of Metals can be explained by Metallic Bonding?

The properties of metals that are a consequence of metallic bonding include:

What is a metallic bond and how does it form?

When the charge is dispersed across a wider distance than the size of single atoms in materials, metallic bonds occur. Left elements, like as zinc and copper, create metallic bonds most frequently on the periodic chart. Metals’ atoms are firmly packed in a regular order because they are solid.

How strong is a metallic bond?

Metals have a high attraction force between their atoms. To overcome it, a lot of energy is required. Metals have high boiling points as a result, with tungsten (5828 K) being particularly high.

To learn more about metallic bonds and other important types of chemical bonds (such as covalent bonds), register with BYJU’S and download the mobile application on your smartphone.