Uses of Methanol and Ethanol

Methanol (CH3OH) and ethanol (C2H5OH) are the simplest members of the primary alcohol family and have a wide range of applications in the fuel industry. Some important uses of methanol and ethanol are listed in this article.

Uses of Ethanol as a Fuel

Ethanol is widely used as a fuel additive and as an engine fuel. Some forms of gasoline are known to contain up to 25% ethanol. This compound has also been used as rocket fuel in some bipropellant rockets. When used in fuel, ethanol is believed to reduce carbon monoxide and nitrogen oxide emissions.

Since it is widely available and has low toxicity and cost, ethanol is used in direct-ethanol fuel cells (or DEFCs). However, commercially used fuel cells generally use methanol, hydrogen, or natural gas. 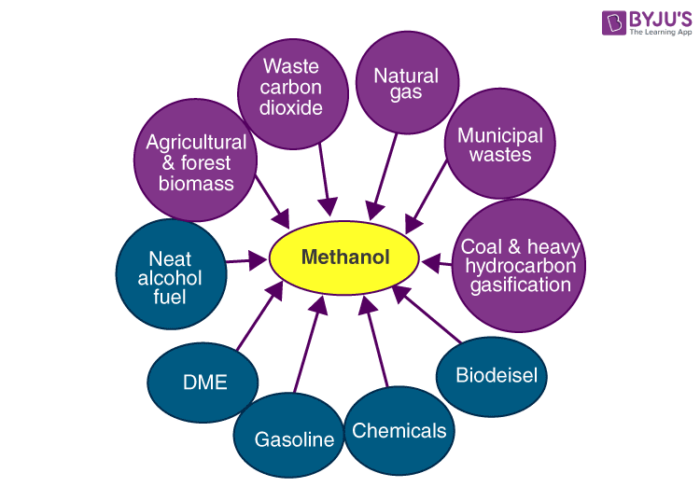 Uses of Methanol in Fuel

Methanol can be used as a fuel in several internal combustion engines. The chemical equation for the burning of methanol is given by:

An advantage of methanol as a fuel is that it is relatively easy to store. The storage of liquid methanol is much easier than the storage of hydrogen gas or natural gas. Other merits of this compound include its biodegradability and its short half-life in groundwater.

What are the main uses of methanol?

Methanol is a highly versatile chemical, also known as methyl alcohol, commonly used for manufacturing applications and ubiquitous in our daily lives. As an energy carrier, its performance has made it increasingly popular as a fuel for factories and for producing electricity.

What is difference between methanol and ethanol?

What are the two uses of ethanol?

It is used as a solvent, in the manufacture of other organic compounds, and as an additive to automobile fuel (a mixture known as gasohol). Ethanol is a major industrial chemical. The intoxicating portion in many alcoholic drinks, such as beer , wine, and distilled spirits, is ethanol.

What’s the difference between methanol and isopropyl alcohol?

A lab solvent, gasoline agent, and antifreeze is methanol. It is easily absorbed by the skin, as most forms of alcohol. However, methanol is dangerously poisonous and can cause damage to the nervous system and organs. Isopropyl alcohol is used as rubbing alcohol and is present in many items of hand sanitizer.

What alcohol is best for disinfecting?

Isopropyl alcohol is quickly antimicrobial against bacteria, fungi , and viruses, particularly in solutions between 60 and 90 percent alcohol with 10-40 percent filtered water. When alcohol concentrations drop below 50 percent, the disinfection gain declines dramatically.

To learn more about the uses of methanol, ethanol, and other important alcohols such as benzyl alcohol, register with BYJU’S and download the mobile application on your smartphone.

Test Your Knowledge On Uses Of Methanol And Ethanol!
Q5