What are Aromatic Compounds?

They are also called aromatics or arenes. The best examples are toluene and benzene. Aromatics require satisfying Huckel’s rule. Plants and micro-organisms have an exclusive route to benzene-ring compounds. The great majority of aromatic compounds in nature, therefore, are produced by plants and micro-organisms, and animals are dependant upon plants for many aromatic compounds either directly or indirectly.

Aromatic hydrocarbon, are hydrocarbons containing sigma bonds and delocalized pi electrons between carbon atoms in a ring. For example, benzene. They are known as aromatic due to their pleasant smell. 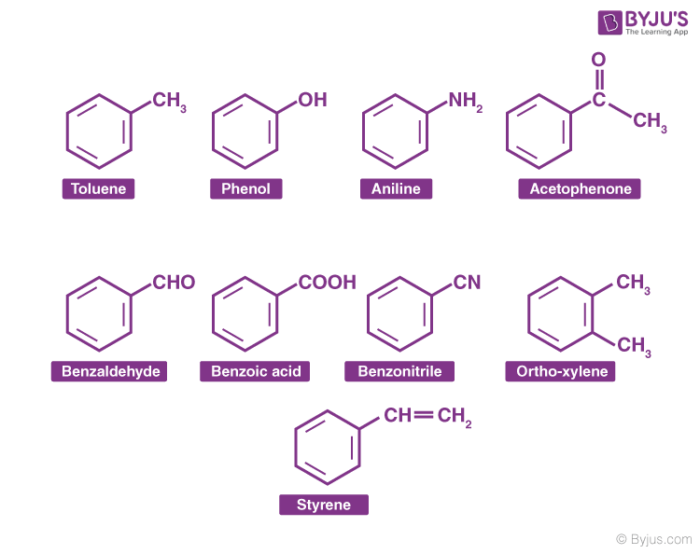 Huckel’s rule states that only planar, fully conjugated monocyclic polyenes having 4n + 2 π electrons, where n is an integer, that is, n = 0, 1, 2, 3, 4, etc., should possess aromatic stability. An aromatic compound must be planar and contain a cyclic cloud of π electrons below and above the plane of the molecule. It contains sp2 hybridized carbon atoms and must obey the Huckel rule.

Arenes are mostly nonpolar and non-miscible in water. These compounds are usually unreactive and are used as solvents for various other nonpolar compounds. Their carbon to hydrogen ratio is high therefore, they are characterized by sooty yellow flame.

The classification of arenes is based on the position of the functional group. They are classified into two and we have discussed below:

In any aromatic compound whenever any substituent or functional group, is directly linked to the benzene ring, it is known as a nuclear-substituted compound.

In any aromatic compound if the functional group is available in the side chain of the ring then it is known as a side chain substituted compound. These compounds are named as the phenyl derivatives of the relative aliphatic compounds.

Earlier, most of the compounds with the same structural formula were known by different names depending on the regions where they were synthesized. This naming system was very trivial since it raised a lot of confusion. Finally, a common naming system enlisting standard rules was set up by IUPAC (International Union for Pure and Applied Chemistry) for the naming of compounds. This method of naming is IUPAC naming or IUPAC nomenclature.

IUPAC nomenclature of aromatic hydrocarbons is explained below:

1. According to IUPAC nomenclature of substituted aromatic compounds, the substituent name is placed as a prefix to the name of aromatic compounds. For example, a benzene ring attached to a one-nitro group is named as nitrobenzene.

3. When different substituted groups are attached to the aromatic compounds, the substituent of the base compound is assigned number one and then the direction of numbering is chosen such that the next substituent gets the lowest number. Substituents are named in alphabetical order. For example: when chloro and nitro groups are attached to the benzene ring, we first locate the chloro group then nitro groups.

4. In the case of multiple substituted aromatic compounds, sometimes terms like ortho (o), meta (m) and para (p) are also used as prefixes to indicate the relative positions 1,2-; 1,3- and 1,4- respectively. For example, 1,2-Di-bromo-benzene can be named as o-di-bromo-benzene.

What is an aromatic organic compound?

Aromaticity is a property in organic chemistry of cyclic (chain-shaped), planar (flat) structures with a ring of resonance bonds that gives greater stability compared to other geometric or connective arrangements with the same collection of atoms.

What are heterocyclic aromatic compounds?

A heterocyclic compound is an organic compound where an atom other than carbon has substituted one or more of the carbon atoms in the molecule’s backbone. Nitrogen, oxygen, and sulphur are normal hetero atoms.

What is the general formula of aromatic compounds?

Aromatic hydrocarbons are compounds that contain benzene as part of their structure, also known as aromatic compounds. Benzene, with formula C6H6, is a cyclic hydrocarbon.

What is the difference between aliphatic and aromatic?

Are all aromatic compounds cyclic?

Cyclic compounds may or may not be aromatic; benzene is an example of a cyclic aromatic compound, while cyclohexane is non-aromatic. Organic compounds that are not aromatic are known as aliphatic compounds, but only aromatic rings are especially stable.

What are the conditions for a compound to be aromatic?

A compound is characterised to be aromatic if it is cyclic, flat, conjugated and obeys Huckel’s rule of aromaticity.

What is Huckel’s rule of aromaticity?

Huckel’s rule of aromaticity states that for a ring to be aromatic, it should be planar and have fully conjugated (4n + 2) pi electrons, where n is an integer.

Why are aromatic compounds more stable?

Aromatic compounds are more stable because they have less hydrogen to carbon ratio.

Why does conjugation increase the stability of the compound?

Conjugation increases the stability of the compound as it connects the p orbital to the delocalised electrons, which lowers the energy of the molecule, thereby increasing its stability.

Are aromatics more reactive than alkenes?

For a detailed discussion on the nomenclature of alkanes, alkenes, and alkynes, download BYJU’S – the learning app.