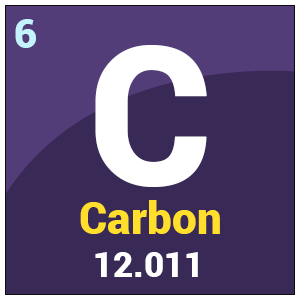 The Atomic number of Carbon is 6.

The carbon allotropes include graphite, one of the softest substances known, and diamond, the hardest material that exists naturally. It easily bonds with other small atoms, including other carbon atoms, and can form several stable covalent bonds with acceptable multivalent atoms. Almost ten million compounds, a vast majority of all chemical compounds, are known to form carbon. Of all elements, carbon also has the highest sublimation point. It has no melting point at atmospheric pressure.

Carbon compounds form the basis of all known life on Earth and some of the energy produced by the Sun and other stars is generated by the carbon-nitrogen cycle. While it forms an exceptional variety of compounds, under normal conditions, most forms of carbon are comparatively unreactive. It resists all but the strongest oxidizers at normal temperature and pressure. Sulfuric acid, hydrochloric acid, chlorine or any alkali do not react. Carbon reacts with oxygen to form carbon oxides at elevated temperatures and can steal oxygen from metal oxides to leave only the elemental metal.

Test your knowledge on carbon
Q5