Chlorine is the second lightest halogen and is represented as Cl. The atomic number of this chemical element is 17. 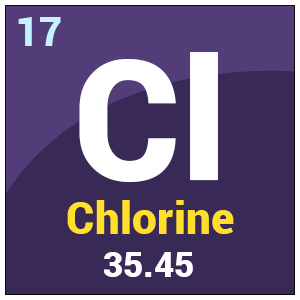 It appears as a pale yellow-green gas. Liquid chlorine can cause skin burn and chlorine in its gaseous form irritates the mucous membrane. Its position as per the periodic table is between fluorine and bromine. Its electronic configuration is [Ne]3s23p5. There are two isotopes of chlorine that are stable.

They are 37Cl  and 35Cl. 36Cl is the stable radioisotope of chlorine. Sodium chloride is the most common compound of chlorine whereas the simplest is hydrogen chloride. Sodium chloride has a molecular formula NaCl whereas hydrogen chloride has a molecular formula HCl. It is highly reactive. Carl Wilhelm Scheele who was a Swedish chemist discovered Chlorine in the year 1774.

Chlorine is the second halogen in the periodic table, being a nonmetal in group 17. Hence, its properties are similar to fluorine, bromine, and iodine, and are generally intermediate among those of the first two. Chlorine has the electron configuration [Ne]3s23p5, with the seven electrons serving as its valence electrons in the third and outermost shell. As all halogens, it is thus one electron short of a full octet, and is thus a strong oxidizing agent, interacting with other elements to complete its outer shell. 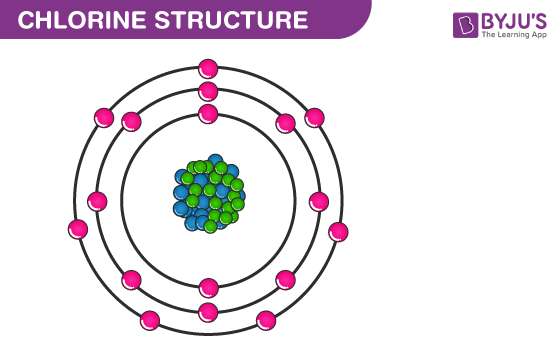 What is the period of chlorine?

Chlorine is a periodic table in group 17, also known as halogens, and is not found in nature as the element-only as a compound. Salt, or sodium chloride, and potassium compounds sylvite are the most common.

Chlorine is unstable as a result of fairly unlikely secondary exposure from exposed persons, but chlorine gas can condense on the skin and contaminate others through dermal contact.

How many electrons does Cl 35 have?

Chlorine contains 17 electrons. This means that there are 17 protons in each of these atoms. Seventeen electrons. Neutrons 35-17 = 18.

Why is chlorine gas Green?

At room temperature, chlorine is a yellow-green gas. Chlorine has a pungent, unpleasant, bleach-like odour that can be detected at low levels. The chlorine gas concentration is around 2.5 times greater than air, which will initially cause it to stay close to the ground in areas with low air movement.

Is chlorine a poisonous gas?

Gaseous chlorine is poisonous and is listed as an irritant to the lungs. It has intermediate water solubility with the ability to cause upper and lower respiratory tract acute damage. Due to its strong smell, chlorine gas can be easily detected.

Learn more about the atomic weight, electron configuration and the uses of Cl from the expert faculties at BYJU’S.

Test your Knowledge on Chlorine!
Q5