Markovnikov’s Rule, also known as Markownikoff’s rule, can be used to describe the outcome of some chemical addition reactions. The Russian chemist Vladimir Vasilyevich Markovnikov first formulated this rule in 1865.

Let us consider the addition reaction wherein an alkene reacts with water to give rise to alcohol. This reaction proceeds via the formation of a carbocation. It is observed in this reaction that the hydroxyl group attaches itself to the carbon with more carbon-carbon bonds whereas the hydrogen atom attaches itself to the other carbon in the double bond, which has more carbon-hydrogen bonds.

What is the Mechanism Behind Markovnikov’s Rule?

To understand this mechanism, let us consider the same example illustrated earlier, i.e. the addition reaction of hydrobromic acid with propene. The Mechanism of Markovnikov’s rule can be broken down into the following two steps.

The alkene is protonated and it gives rise to the more stable carbocation as shown below.

The halide ion nucleophile now attacks the carbocation. This reaction yields the alkyl halide. Since the formation of the secondary carbocation is preferred, the major product of this reaction would be 2-bromopropane as illustrated below.

It is important to note that Markovnikov’s rule was developed specifically for its application in the addition reaction of hydrogen halides to alkenes. The opposite of  ‘Markovnikov’ addition reactions can be described as Anti-Markovnikov based on the regioselectivity of the reaction.

The Hydration of Alkenes

When alkenes are treated with certain aqueous acids (usually sulfuric acid), the resulting electrophilic addition reaction yields an alcohol as the product. The regioselectivity of such reactions can be predicted by Markownikoff’s rule. Therefore, these reactions can be classified as Markovnikov reactions. In the hydration of alkenes, the H+ ion acts as an electrophile and attacks the alkene to generate a carbocation intermediate (the intermediate with greater stability is protonated). The subsequent nucleophilic attack on the carbocation by water molecules forms an oxonium ion, which is deprotonated to afford the required alcohol product.

When alkenes are treated with borane (BH3) in the presence of hydrogen peroxide or sodium hydroxide, an alcohol is obtained as the final product. In this electrophilic addition reaction, the boron atom acts as an electrophile. This reaction does not obey Markovnikov’s rule and can, therefore, be classified as an anti-Markovnikov reaction. 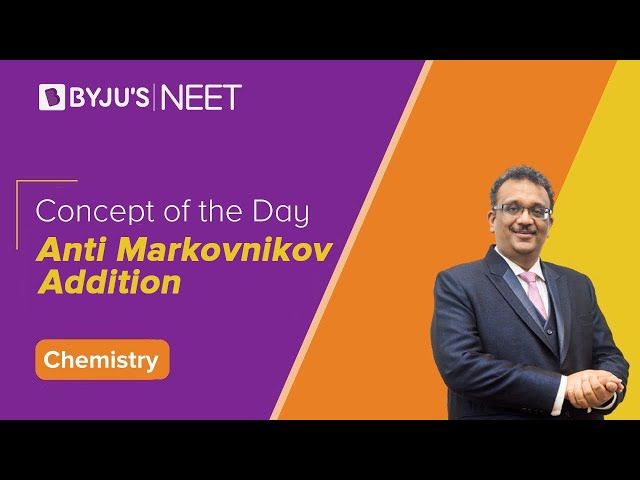 What is the reasoning behind Markovnikov’s Rule?

The protonation of the alkene by the protic acid results in the formation of a carbocation. The most stable carbocation is the one in which the positive charge is held by the carbon with the greatest number of alkyl substituents. Therefore, the majority of the product features the addition of the halide to the carbon having fewer hydrogen substituents.

Since the bromine atom attaches itself to the carbon having a greater number of hydrogen atoms (or fewer alkyl substituents), the reaction illustrated above does not obey Markovnikov’s rule.

If the following reaction obeys Markovnikov’s Rule, what would be the Major Product?

The product in which bromine is attached to the secondary carbon would be the major product. The CH3CH=CHBr product would be the minor product as per Markovnikov’s Rule.

What does Markovnikov’s rule predict?

Which reactions do not obey Markovnikov’s rule?

Markovnikov’s rule states that when an asymmetrical reagent is added to an asymmetrical alkene, then the negative half of the reagent will attach to the carbon atom containing fewer hydrogen atoms.

The addition of hydrogen halide to an unsymmetrical alkene follows markovnikov’s rule in the absence of hydrogen peroxide.

Why does Markovnikov’s rule work?

Markovnikov’s rule works on the basis of the formation of the most stable carbocation during the addition reaction. However, it does fail in the presence of peroxide and symmetrical alkenes.

What is the peroxide effect?

The modification in regioselectivity of the addition of HBr to an alkene or alkyne in the presence of peroxide is known as the peroxide effect. Under the presence of a peroxide, the negative half of the reagent will attach to the carbon atom containing more hydrogen atoms.

Name a compound that does not follow Markovnikov’s rule?

2-Butene does not follow Markovnikov’s rule as it is a symmetrical alkene.

To learn more about this concept and other concepts related to addition reactions, register with BYJU’S and download the mobile application on your smartphone.