What is Vapour Pressure?

When the liquid is heated, the energy of the molecules rises; it becomes lighter and occupies the surface of the liquid. This process is known as ‘evaporation’. The molecules which can be seen on the liquid surface are called ‘vapor’.

The evaporation continues at a constant rate the temperature of the liquid is kept constant. When some molecules of the liquid in the vapour phase, strikes the walls of the containers or the surface of the liquid, it may get converted back to the liquid phase. This process is called condensation.

Vapour pressure, also known as vapour equilibrium pressure, can be defined as the pressure exerted (in a system featuring thermodynamic equilibrium) by a vapour with its condensed phases (solid or liquid) in a closed system at a given temperature. The equilibrium vapour pressure is known to serve as an indicator of the evaporation rate of a liquid. The propensity of particles to escape from the liquid (or a solid) is known to be related. A material that, at normal temperatures, has a high vapour pressure is generally referred to as a volatile material. It can be noted that the pressure exhibited above a liquid surface by the vapour is called vapour pressure. 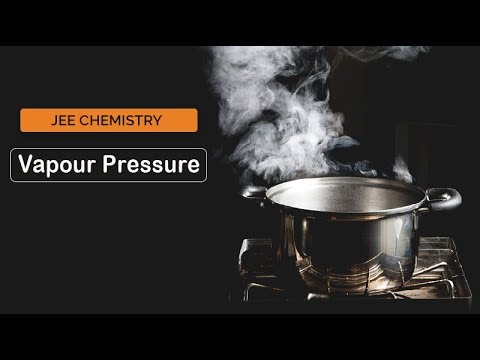 The process of evaporation depends on different factors:-

1. Nature of the liquid

Where P1o is the vapour pressure of component 1 in a pure state.

From Dalton’s Law of partial pressures we know that,

Using the values of P1 and P2 from equation (1) and (2) respectively we have:

We can draw the following inferences from the above equation:

What is a boiling point?

The standard boiling point of the liquid is given at:

What is the Heat of Vaporization?

As we provide heat to a liquid, its energy increases, which results in an increase in the overall temperature. At the boiling point, the additional heat is used up by the molecules to overcome the intermolecular force of attraction in the liquid and change to the gaseous state.

When 1 mole of liquid is transformed into a gaseous state, the amount of heat provided by this process is known as the Heat of Vaporization.

What is vapour pressure?

What is Raoult’s Law equation?

Raoult’s law is a chemical law that relates the solution’s vapour pressure to the mole fraction of a solution added. The law of Raoult is expressed through the formula.
Psolution = ΧsolventP0solvent.

Is vapour pressure proportional to temperature?

Does vapour pressure increase with a boiling point?

As a result, there are lower boiling points of liquids with high vapour pressure. By heating a liquid and allowing more molecules to enter the atmosphere, vapour pressure may be increased. This begins at the point where the vapour pressure is equal to the boiling atmospheric pressure.

Which has maximum Vapour pressure?

This was just a quick intro about the vapour pressure. To find out more about different states of liquid, please download BYJU’S the learning app.