What is Avogadro’s Law?

Avogadro’s law, also known as Avogadro’s principle or Avogadro’s hypothesis, is a gas law which states that the total number of atoms/molecules of a gas (i.e. the amount of gaseous substance) is directly proportional to the volume occupied by the gas at constant temperature and pressure.

Avogadro’s law is closely related to the ideal gas equation since it links temperature, pressure, volume, and amount of substance for a given gas.

Avogadro’s law is named after the Italian scientist Amedeo Carlo Avogadro, who suggested that two dissimilar ideal gases occupying the same volume at a given (constant) temperature and pressure must contain an equal number of molecules.

At constant pressure and temperature, Avogadro’s law can be expressed via the following formula:

The graphical representation of Avogadro’s law (with the amount of substance on the X-axis and volume on the Y-axis) is illustrated below.

Here, the straight line (which indicates that the two quantities are directly proportional) passes through the origin, implying that zero moles of gas will occupy zero volume.

Avogadro’s law can be derived from the ideal gas equation, which can be expressed as follows:

Rearranging the ideal gas equation, the following equation can be obtained.

Here, the value of (RT)/P is a constant (since the temperature and pressure kept constant and the product/quotient of two or more constants is always a constant). Therefore:

Thus, the proportionality between the volume occupied by a gas and the number of gaseous molecules is verified.

Molar Volume of a Gas

As per Avogadro’s law, the ratio of volume and amount of gaseous substance is a constant (at constant pressure and temperature). The value of this constant (k) can be determined with the help of the following equation:

Therefore, one mole of any gaseous substance occupies 22.4 litres of volume at STP.

Another common example of Avogadro’s law is the deflation of automobile tyres. When the air trapped inside the tyre escapes, the number of moles of air present in the tyre decreases. This results in a decrease in the volume occupied by the gas, causing the tyre to lose its shape and deflate.

What are the Limitations of Avogadro’s Law?

Despite being perfectly applicable to ideal gases, Avogadro’s law provides only approximate relationships for real gases. The deviation of real gases from ideal behaviour increases at low pressure and high temperature.

It is important to note that gases molecules having relatively low molecular masses (such as helium and hydrogen) obey Avogadro’s law to a greater extent than heavier molecules.

One mole of helium gas fills up an empty balloon to a volume of 1.5 litres. What would be the volume of the balloon if an additional 2.5 moles of helium gas is added? (Assume that the temperature and the pressure are kept constant)

The balloon would occupy a volume of 5.25 litres when it contains 3.5 moles of helium gas.

A tyre containing 10 moles of air and occupying a volume of 40L loses half its volume due to a puncture. Considering that the pressure and temperature remain constant, what would be the amount of air in the deflated tyre?

The deflated tyre would contain 5 moles of air. 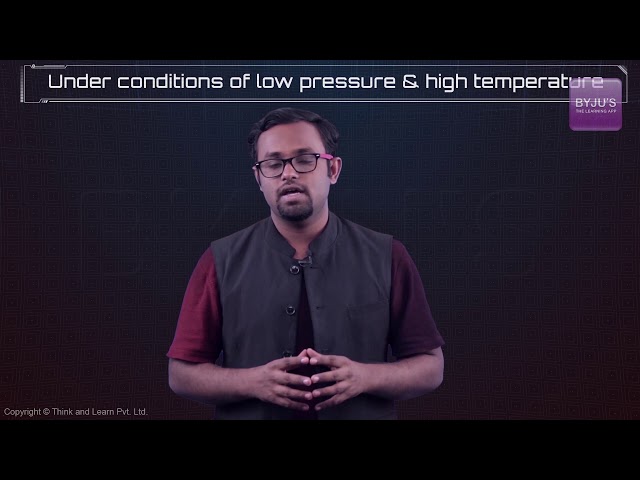 What does Avogadro’s law state?

Avogadro’s law states that equal volumes of different gases contain an equal number of molecules under the same conditions of temperature and pressure.

Why is Avogadro’s law important?

The link between the amount of gas (n) and the volume (V) is investigated via Avogadro’s law (v). It’s a direct relationship, which means the volume of a gas is proportional to the number of moles contained in the gas sample. The law is significant because it allows us to save time and money over time.

The physics theory known as Charles’ law asserts that the volume of a gas equals a constant value multiplied by its Kelvin temperature.

Avogadro’s law states that equal volumes of different gases contain an equal number of molecules under the same conditions of temperature and pressure.

Why is Avogadro’s law only for gases?

This is because there is so much space between each molecule that the size of the molecule has no bearing on the volume of the material. This is why the volume of a gas is governed by the pressure applied to it, and why under the same pressure, all gases have the same volume.

What are the limitations of Avogadro law?

Avogadro law is only applicable to real gases. It is not valid at low temperature and high pressure as a real gas behaves like an ideal gas under that conditions. Moreover, it is also not applicable to heavy molecules.

What are the applications of Avogadro law?

Can we apply the ideal gas law to liquids?

No, we can not apply the ideal gas law to liquids. Ideal gas law states that the volume is variable. However, it is not possible in liquids.

When was Avogadro’s law discovered?

Why was Avogadro’s law rejected?

Avogadro’s law was rejected because, at that time, dalton believed that atoms of the same kind could not combine, which is not true.
To learn more about Avogadro’s law and other important gas laws, such as Boyle’s law, register with BYJU’S and download the mobile application on your smartphone.
Test your knowledge on avogadros law!
Q5