What Is Ionization Energy?

the amount of energy required by an isolated gaseous atom to lose an electron in its ground state. 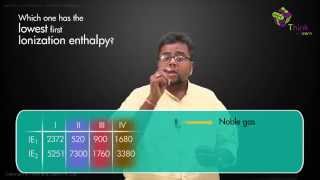 In the same way, second ionization energy is described as the energy needed to remove the second electron from its valence shell. It can be explained by the equation given below:

1. Trends in ionization enthalpy in a group:

The first ionization enthalpy of elements decreases as we move down in a group. While moving down in a group, the atomic number increases and the number of shells also increases. Outermost electrons are far away from the nucleus and thus can be removed easily. The second factor that decreases the ionization energy is the shielding effect due to an increasing number of shells as we move down a group.

2. Trends in ionization enthalpy across a period:

As we move from left to right across a period, the ionization energy of elements increases. This is due to the decrease in the size of atoms across a period. The valence electrons get closer to the nucleus of an atom as we move from left to right due to increased nuclear charge. The force of attraction between the nucleus and the electrons increases and hence more energy is required to remove an electron from the valence shell.