Functional Groups, in the field of organic chemistry, are the substituent atoms or groups of atoms that are attached to specific molecules. These moieties (the part of the molecule which can be found in many other molecules as well) are responsible for the chemical reactions that the molecule they are attached to participate in.

What are Functional Groups?

Functional Groups are a “particular grouping of components in which the distinctive chemical reactions of these molecules are accountable”.

The process of chemical synthesis, in which chemical reactions are intentionally executed in order to obtain a specific compound, can be designed by understanding the properties of various functional groups.

A few functional groups involving carbon are illustrated below.

Therefore, it can be understood that functional groups are the moieties which exhibit their own distinct features and properties independent of the molecule they are attached to.

Some more functional groups containing elements such as nitrogen and oxygen featuring different hybridizations of the carbon-nitrogen and the carbon-oxygen bonds are illustrated below. 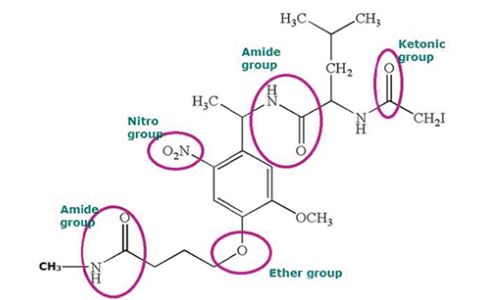 The presence of functional groups in a molecule also affects the solubility and the tendency to form complexes of the molecule in question. If the functional groups of the solute and the solvent interact well, the solubility increases. For example, since sugar and water both contain the -OH (hydroxyl) group, sugar can be easily dissolved in water.

In the scenario wherein a highly electronegative functional group is attached to a less electronegative atom or molecule, a polarity arises which enables the initially nonpolar molecule to be soluble in water or other aqueous environments.

The common functional groups, along with the prefix and the suffix which must be used in their nomenclature are provided in this subsection. Additionally, a brief description of the constitution of each of these groups is also provided.