What is a Fuel Cell?

Fuel cells require a continuous input of fuel and an oxidizing agent (generally oxygen) in order to sustain the reactions that generate the electricity. Therefore, these cells can constantly generate electricity until the supply of fuel and oxygen is cut off.

Despite being invented in the year 1838, fuel cells began commercial use only a century later when they were used by NASA to power space capsules and satellites. Today, these devices are used as the primary or secondary source of power for many facilities including industries, commercial buildings, and residential buildings.

A fuel cell is similar to electrochemical cells, which consists of a cathode, an anode, and an electrolyte. In these cells, the electrolyte enables the movement of the protons. 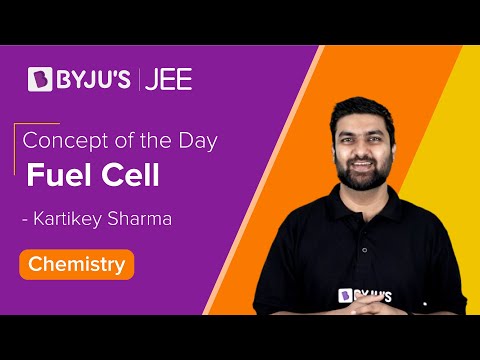 The reaction between hydrogen and oxygen can be used to generate electricity via a fuel cell. Such a cell was used in the Apollo space programme and it served two different purposes – It was used as a fuel source as well as a source of drinking water (the water vapour produced from the cell, when condensed, was fit for human consumption).

The working of this fuel cell involved the passing of hydrogen and oxygen into a concentrated solution of sodium hydroxide via carbon electrodes. The cell reaction can be written as follows:

However, the reaction rate of this electrochemical reaction is quite low. This issue is overcome with the help of a catalyst such as platinum or palladium. In order to increase the effective surface area, the catalyst is finely divided before being incorporated into the electrodes.

A block diagram of this fuel cell is provided below.

The efficiency of the fuel cell described above in the generation of electricity generally approximates to 70% whereas thermal power plants have an efficiency of 40%. This substantial difference in efficiency is because the generation of electric current in a thermal power plant involves the conversion of water into steam, and the usage of this steam to rotate a turbine. Fuel cells, however, offer a platform for the direct conversion of chemical energy into electrical energy.

Fuel cell technology has a wide range of applications. Currently, heavy research is being conducted in order to manufacture a cost-efficient automobile which is powered by a fuel cell. A few applications of this technology are listed below.

What is a fuel cell?

How does a fuel cell differ from conventional methods of energy generation?

A fuel cell is different from the conventional methods of energy generation because, in a fuel cell, chemical energy is directly converted into electrical energy without intermediate conversion into mechanical power.

Why is fuel cell better than the conventional methods of energy generation?

A fuel cell is preferred over conventional methods of energy generation because, in a fuel cell, zero combustion takes place. Thus, carbon dioxide is not produced.

What are the benefits of a fuel cell?

Which electrolyte is used in molten carbonate fuel cells?

Thus, the different types of fuel cells and the working of an alkaline fuel cell are briefly discussed in this article along with some applications of these electrochemical cells. To learn more about this technology and other related topics, register with BYJU’S and download the mobile application on your smartphone.