We will begin this article by understanding ideal gas law and its application in the constant volume gas thermometer. The constant volume gas thermometer is made of a bulb filled with a known fixed amount of a dilute gas attached to a mercury manometer. The bulb is brought in contact with the source. The manometer attached to the bulb allows us to measure the pressure. The manometer is filled halfway with mercury and it is connected with a flexible tube to another partially filled column of mercury. This is called the reservoir. The height of mercury at a known temperature is measured and calibrated. During temperature measurement this height is fixed while the mercury in the reservoir is moved up or down.

That explains the gas thermometer but how does it work? This is where the ideal gas law comes in. The fundamental measurements of gas is done with pressure, P, volume, V and temperature, T. You would do well to remember that the temperature scale here is in SI Units, ie Kelvin; T = t + 273.15 where t is in oC. The pressure, volume and temperature of a gas are all interrelated. This interrelation was first explored by an English Chemist, Robert Boyle. The Boyle’s law states that when the temperature of a sample of gas is held constant, PV = Constant.

Next came the Charles Law, from the French scientist, Jacques Charles. He discovered that when the pressure of a gas is held constant, the volume is related to the temperature; V/T = Constant.

These laws later were combined to yield one universal law for gases known as the ideal gas law.

The proportionality factor in this equation is the Universal Gas Constant, R ie, constant = nR. 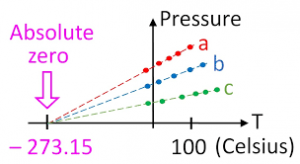 On extrapolating this graph, what we see is that, irrespective of which gas we are graphing, the graphs always intercept the x axis at a point we now call the absolute zero. This point represents the beginning of the Kelvin scale i.e Zero K. In the Celsius scale, 0 K is equivalent to -273.5 oC. This is the coldest temperature possible. As a molecule gets colder, it’s energy and consequently its movement and vibrations decrease in amplitude. As we keep cooling it, at a point the atom will reach a state of minimum internal energy where the atom has lost almost all its energy and is stationary.

If you liked the article, download BYJU’s – the learning app to learn more fascinating intricacies of science. Come learn from us and fall in love with learning.