Crystalline solids exhibit a regular and repeating pattern of constituent particles. The diagrammatic representation of three-dimensional arrangements of constituent particles in a crystal, in which each particle is depicted as a point in space is known as a crystal lattice. In a crystal lattice, the atoms are very closely packed, leaving very little space between them. This arrangement of elements in solids also helps us in the determination of the formula of a compound. We have learned three-dimensional solid packing can be packed in two ways viz., cubical close packing (CCP) and hexagonal close packing (HCP). 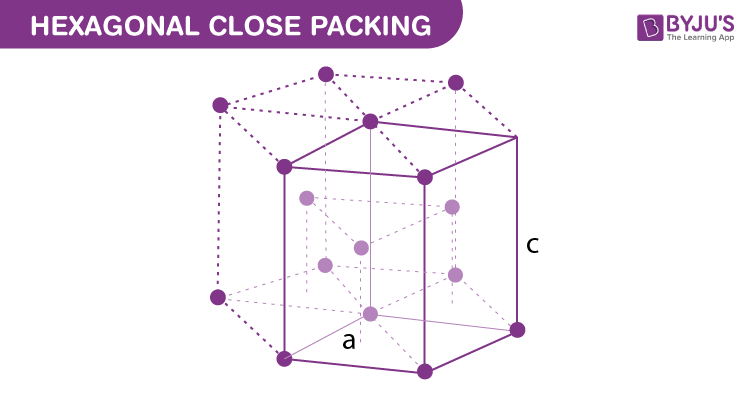 Question: Atoms of element Y form hexagonal close packing lattice and those of the element X occupy 1/4th of tetrahedral voids. What is the formula of the compound formed by the elements X and Y?

Solution: The number of tetrahedral voids formed = 2 × (number of atoms of element Y)

Since only 1/4th of these voids are occupied by X, the ratio of elements of X to Y can be given by:

Thus, the formula of the compound is XY2.

What is close packing in solids?

Near crystal, packing refers to the effective arrangement of constituent particles in a crystal lattice in a vacuum. We have to assume that all particles (atoms, molecules and ions) are of the same spherical solid form to grasp this set more precisely. So a cubic structure is the unit cell of a lattice.

How many types of close packing are known in crystals?

Hexagonal tightly packed (hcp) refers to layers of packed spheres such that spheres overlay each other in alternating layers. A slip framework, which is a close-packed structure, is hexagonal near packed. For elemental metals, the hcp structure is very general, including beryllium.

Take up a quiz on Hexagonal Close Packing Formula
Q5