What is Caustic Soda?

Caustic soda is an alkali salt which is also called Lye. It is the common name of sodium hydroxide. This name is given due to the corrosive nature of this salt on animal and plant tissues. It has a wide range of applications. The chemical formula of sodium hydroxide is NaOH.

Sodium hydroxide can be prepared by various methods like: 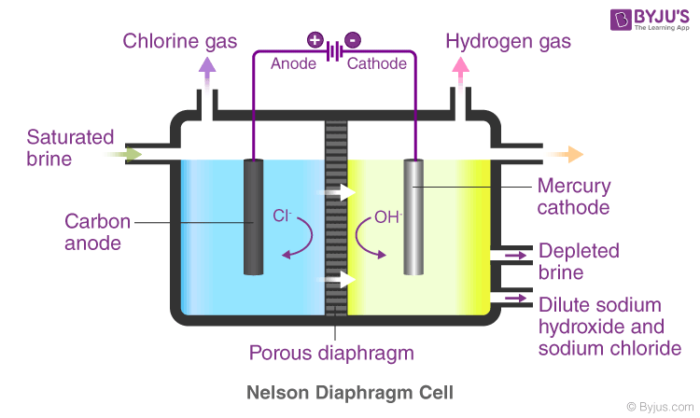 Principle: In the Castner-Kellner method, electrolysis of brine solution is performed in order to obtain sodium hydroxide.

Castner-Kellner cell: It is a steel tank that is rectangular. Ebonite is lined inside the tank. Titanium acts as an anode and a layer of mercury at the bottom of the tank acts as the cathode.

Ionization of brine solution occurs according to the following reaction:

Reaction at the anode:

Reaction at the cathode:

The amalgam formed is then transferred to another chamber called denuder. In the denuder, it is treated with water to obtain a sodium hydroxide solution. On evaporation of the solution, solid sodium hydroxide is formed. This is a very efficient process in order to obtain pure caustic soda.

To learn more about Caustic Soda, Register with BYJU’S and download the mobile application on your smartphone.

Ans: Caustic soda is used in the following:

Ans: NaOH is the chemical formula of caustic soda.

4. What is the role of caustic soda in the industrial cleaning process?

Ans: Since caustic soda dissolves the grease, protein-based deposits,  fats, and oil, it is added to water and heated, to use it in the cleaning of process equipment, and storage tanks.

5. What are the health effects of caustic soda?