In general, any element which corresponds to the d-block of the modern periodic table (which consists of groups 3-12) is considered to be a transition element. Even the f-block elements comprising the lanthanides and the actinides can be considered as transition metals. 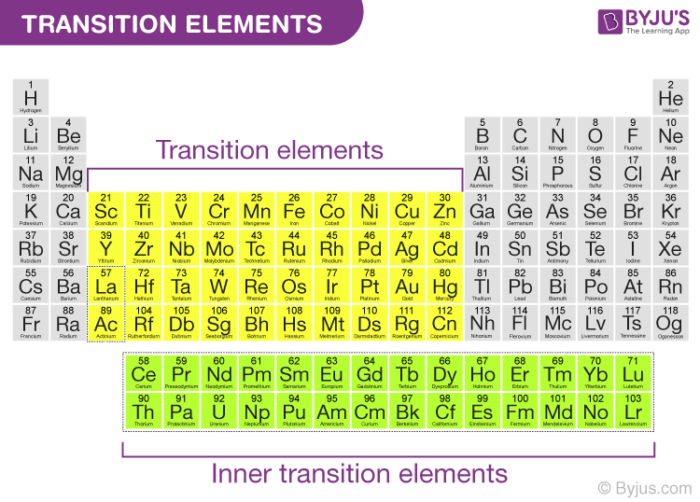 It is important to note that the element’s mercury, cadmium, and zinc are not considered transition elements because of their electronic configurations, which corresponds to (n-1)d10 ns2.

These elements have completely filled d orbitals in their ground states and even in some of their oxidation states. One such example is the +2 oxidation state of mercury, which corresponds to an electronic configuration of (n-1)d10.

The list of the first two rows of transition elements with their corresponding electronic configurations is tabulated below. It can be noted that in some of these elements, the configuration of electrons corresponds to (n-1)d5 ns1 or (n-1)d10 ns1. This is because of the stability provided by the half-filled or completely filled electron orbitals.

It can be observed that the Aufbau principle is not followed by many transition elements like chromium. The reason for this is believed to be the relatively low energy gap between the 3d and 4s orbitals, and the 4d and 5s orbitals.

The atomic and ionic radii of the transition elements decrease from group 3 to group 6 due to the poor shielding offered by the small number of d-electrons. Those placed between groups 7 and 10 have somewhat similar atomic radii and those placed in groups 11 and 12 have larger radii. This is because the nuclear charge is balanced out by the electron-electron repulsions. While traversing down the group, an increase in the atomic and ionic radii of the elements can be observed. This increase in the radius can be explained by the presence of a greater number of subshells. In a way, the ionization energy of an element is closely related to its atomic radius. Atoms with smaller radii tend to have greater ionization enthalpies than those with relatively larger radii. The ionization energies of the transition metals increase while moving along the row (due to the increase in atomic number).

What are the General Characteristics of Transition Elements?

The d-block elements are known for their:

These elements also exhibit a wide variety of oxidation states and tend to form compounds that act as catalysts in many chemical processes.

What are the Metallic Qualities of the Transition Metals?

However, trends can be observed in the metallic properties of the transition elements. For example, elements such as chromium and molybdenum are some of the hardest transition metals because they contain many unpaired electrons.

Explain the Reason Behind the High Melting/Boiling Points of Transition Elements.

The presence of unpaired electrons leads to the formation of metal-metal covalent bonds along with the metallic bonds. These strong bonds attribute high melting and boiling points to the elements. The presence of a partially filled d-orbital enables the transition elements to have a greater number of unpaired electrons, which in turn increases their ability to form covalent bonds along with metallic bonds.

Why are some Transition Metals Referred to as Noble Metals?

Some elements in the lower right corner of the d-block on the modern periodic table (such as gold, silver, and platinum) are often referred to as noble metals. These metals are highly unreactive owing to their low enthalpies of hydration and high ionization enthalpies.

These metals are highly resilient towards acids. However, metals like platinum, mercury, and gold can be dissolved in some acid mixtures such as aqua regia (a mixture of hydrochloric acid and nitric acid). It can be noted that silver does not dissolve in aqua regia.

What are the Uses of Transition Metals?

Iron, a transition metal, is widely used in the construction industry. It is usually alloyed into steel, which exhibits greater tensile strength and versatility. Iron is also used as a catalyst for the industrial production of ammonia via the Haber process. Titanium, another transition metal, is used in aircrafts, piping for nuclear power plants, and in artificial hip replacements.

The primary application of the transition element nickel is in the production of stainless steel. Copper, a transition metal, is widely used in electrical wiring because of its high tensile strength, malleability, ductility, and electrical conductivity.

Thus, the electronic configurations and the properties of the transition metals are briefly discussed in this article. To learn more about the transition elements and other groups of elements in the periodic table, register with BYJU’S and download the mobile application on your smartphone.