Sodium sulfite (Na2SO3) is a white, water-soluble, crystalline solid with a sulphurous, salty taste. It decomposes when heated. It is generally available in powder, crystalline, and tablet forms.

The food industry used sodium sulfite to assist in the preservation of the new appearance of food products. In many drugs, it is also an element that helps to preserve their potency and stability. Sodium sulfite has been approved by the FDA as a fresh low regulatory priority animal drug.

What is Sodium Sulfite?

Sodium sulfite is an inorganic salt with the chemical formula Na2SO3. It is an ionic compound containing two sodium cations (Na+) and one sulfite anion (SO32-). A saturated solution of sodium sulfite in water is mildly basic with an approximate pH value of 9. Such a solution can undergo crystallisation to yield heptahydrate crystals of Na2SO3. 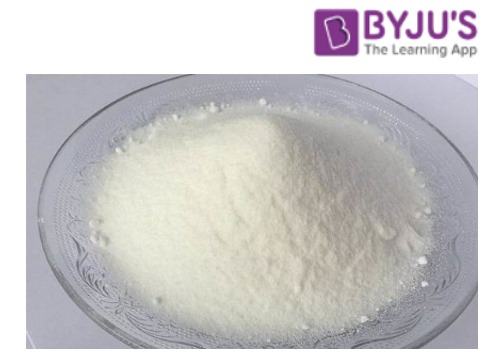 In its anhydrous form (image provided above), sodium sulfite is a white solid. The primary difference between anhydrous Na2SO3 and its heptahydrate is the relative stability of the anhydrous form towards oxidation. Na2SO3.7H2O is slowly oxidised by atmospheric oxygen, giving rise to the corresponding sulphate.

In a sodium sulfite molecule, there exist two ionic bonds between the sodium cations and the sulfite anion. The structure of a Na2SO3 molecule is illustrated below.

Each sodium ion holds a charge of +1. On the other hand, the -2 charge on the sulfite ion is delocalized due to resonance, resulting in a partial charge of -⅔ on each oxygen atom. The overall charge on a Na2SO3 molecule is zero.

1. In laboratories, sodium sulfite is generally prepared from the reaction between gaseous sulphur dioxide (SO2) and sodium hydroxide (NaOH). The chemical equation for this reaction is given by

The depletion of the NaOH reactant can be detected via the addition of a few drops of concentrated H2SO4, resulting in the liberation of SO2 gas.

2. Industrially, Na2SO3 is produced from the reaction between sulphur dioxide and sodium carbonate solution. Initially, sodium bisulfite (NaHSO3) is formed. This compound now reacts with sodium carbonate or sodium hydroxide to yield the sodium sulfite product. The reaction can be generalised to:

Some important physical and chemical properties of sodium sulfite are listed in this subsection.

Although its primary applications lie in the pulp and paper industry, Na2SO3 has numerous other applications. A few such applications are listed below.

Sulfites are compounds containing the sulfite ion, most often in combination with sodium (sodium sulfite) or potassium (potassium sulfite). Sulfites release the irritant gas sulphur dioxide, which acts as a preservative and bleaching agent. As well as occurring naturally in some foods and in the human body, sulfites are added to certain foods to act as a preservative as they inhibit microbial growth, maintain food colour and increase shelf life.

Foods to which sulfites are commonly added include wines, beer and dried fruit. They are also used to bleach food starches, such as potato starch and are used in the production of some food packaging materials such as cellophane.

It is still unclear why sulfites elicit an allergic reaction in some people but not in others. Sulphur dioxide is an irritant gas and so reflex contraction of the airways has been proposed as one possible mechanism, as the majority of sulfite allergic individuals exhibit asthma-like symptoms.

What is sodium sulfite used for?

Sodium sulfite is used as a sulfonation and sulfomethylation agent in the chemical manufacturing industry. It is also used for sodium thiosulfate production. This compound has several other important applications, including froth ores flotation, oil recovery, food preservatives, and colouring.

Is sodium sulfite an acid or a base?

Sodium sulphite, Na2SO3, is a salt made from the neutralisation reaction between a strong base (sodium hydroxide) and a weak acid (sulphurous acid). Its aqueous solution is, therefore, distinctly basic in nature, with a  pH value slightly greater than 7.

Is sodium sulfite ionic or covalent?

How do you make sodium sulfite?

Sodium sulfite can be prepared by the treatment with sulphur dioxide of a sodium hydroxide solution. The Na2SO3 initially precipitates as a yellow solid when performed in warm water. The solid dissolves with more SO2 to give the disulfite, which crystallises as it cools down.

What is sodium sulfite used for in food?

For decades, sulfites have been used as food additives primarily to improve taste and maintain freshness. But these sulphur-based compounds also occur naturally in foods, such as fermented beverages and wines. For a number of drugs, they are often used as a preservative to help improve shelf life.

Sodium sulfite also finds use in the froth flotation process of purifying ores, extraction of petroleum, and the production of some dyes. To learn more about this compound and other ionic compounds containing sodium, such as sodium chloride, register with BYJU’S and download the mobile application on your smartphone.