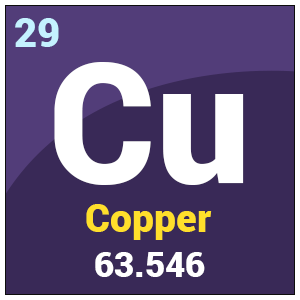 Copper is soft, but it is tough. It is easily mixed with other metals to form alloys such as bronze and bronze. Bronze is a tin and copper alloy, and brass is a zinc and copper alloy. Copper and brass are quickly recycled. Maybe 70% of the copper actually in use has been recycled at least once.

Density of a pure solid chemical element is always listed as the density of the equilibrium crystalline state of that element, usually at room temperature unless specified otherwise. This information must be borne in mind when considering the density for example, of copper which has an FCC crystal structure. The packing fraction for an FCC close packed structure of hard spheres is 0.740. The slight discrepancy between the two methods of calculated [adding fractions is due to truncation and rounding off.

The density of copper in the amphorous solid state at room temperature can be predicted by the ratio of packing fraction. Copper is the most naturally occurring element other than gold with a distinctive hue. Unlike gold and silver, copper is a magnificent conductor of heat and electricity. It’s very malleable and ductile, too. Copper is also corrosion-resistant (it does not rust very easily).

What are the main uses of copper?

The primary applications of copper are in electrical wiring, roofing, plumbing, and industrial machinery. For most of these applications, copper is used in its pure form. However, it can be alloyed with other metals when increased levels of hardness are required. Copper wires are known to be used in power generation, power distribution, power transmission, and electronic circuits. In fact, more than half of all mined copper is used in electrical wiring.

Why is copper ideal for making wires?

Some desirable properties of copper that make it ideal for electrical wiring applications are:

These properties of copper make it the ideal choice of metal for the production of electrical wires.

What is the electron configuration of copper?

What are the melting and boiling points of copper?

Why is copper denoted by the symbol ‘Cu’?

The symbol ‘Cu’ denotes the Latin name of copper, which is Cuprum. Copper can be classified as a native metal which can occur in nature in its pure form.

What are the effects of copper on humans?

Long-term exposure to copper can cause inflammation of the nose, throat, and eyes, causing headaches , stomach aches, dizziness, vomiting, and diarrhoea. Intensively high copper absorption can cause liver and kidney damage and even death. If copper is carcinogenic has not yet been determined.

Is Copper toxic to humans?

Copper is important to good health. However, exposure to higher doses may be harmful. Long-term exposure to copper dust may irritate your nose, mouth, and eyes, causing headache, dizziness, nausea, and diarrhoea. We don’t know whether copper can cause cancer in humans.

Why is copper so important?

Copper is a resource and an important part of our daily lives. This is a major industrial metal due to its high ductility, malleability, thermal and electrical conductivity and corrosion resistance. It’s an essential nutrient in our daily diet.

Test your Knowledge on Copper!
Q5