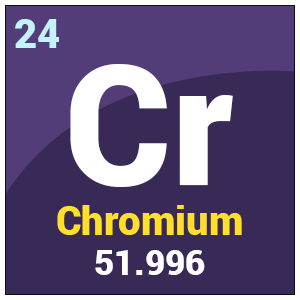 The Electronic configuration of chromium is [Ar]3d5 4s1.

Ferrochromium alloy is commercially produced by silicothermic or aluminothermic reactions from chromite and chromium metal by processes of roasting and leaching followed by carbon and then aluminium reduction. For its elevated corrosion resistance and hardness, chromium metal is of high value. The discovery that steel could be made highly resistant to corrosion and discolouration by adding metallic chromium to form stainless steel was a major development in steel production. Together, stainless steel and chrome plating (electroplating with chromium) account for 85% of industrial use.

The chromium metal left in the air is passivated, creating a thin, protective oxide surface layer. This layer has a spinal structure, with just a few dense atomic layers. It is very thick and prevents oxygen diffusion through the metal underlying it. In addition, iron forms a more porous oxide through which oxygen can migrate, causing continued rusting. A brief interaction with oxidising acids such as nitric acid can improve passivation. Passivated chromium is stable against acids. With a powerful reducing agent that removes the protective oxide layer on the metal, passivation can be removed. This treated chromium metal readily dissolves in weak acids.

What is chromium element used for?

Chromium and other alloys are used in stainless steel. For example, on cars and bicycles, chromium plating creates a smooth, silver finish that is highly corrosion resistant. The metal is commonly used as a catalyst as well. Chromium compounds are prized for their bright colours of green, purple, red and orange as pigments.

What family does chromium belong to?

On the Periodic Table of Elements, chromium is a transition metal in Group 6. Chromium, in its pure form, is a silvery, lustrous, hard metal with a large finish that is suitable for electroplating.

Is chromium toxic to humans?

The health risks associated with chromium exposure are based on its state of oxidation. The form of the metal (chromium as it appears in this product) has a low toxicity level. The hexavalent form is poisonous. Ulcerations, dermatitis, and allergic skin reactions can involve adverse effects of the hexavalent form on the skin.

What diseases can be caused by chromium?

Via inhalation and dermal path, Chromium is extremely toxic and causes lung cancer, nasal inflammation, nasal ulcer, and hypersensitivity reactions such as contact dermatitis and asthma. Chromium has an effect on different aspects of the immune system which may contribute to immunostimulation or immunosuppression.

What common compounds is chromium found in?

Test your Knowledge on Chromium!
Q5