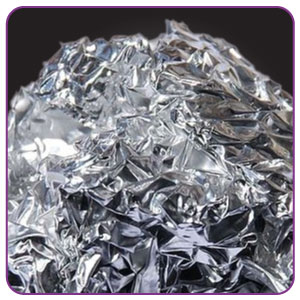 Aluminium is a soft, silvery-white, ductile, nonmagnetic metal in the boron group.

It is the third most abundant element in the Earth’s crust. Depending on the surface reference, aluminium appears in the range from silvery to dull grey.

Various physical properties of aluminium have been discussed below:

Sodium aluminate is also formed by the action of sodium hydroxide on elemental aluminium which is an amphoteric metal. The reaction is highly exothermic once established and is accompanied by the rapid evolution of hydrogen gas.

Aluminum metal rapidly develops a thin layer of aluminum oxide of a few millimeters that prevents the metal from reacting with water. Aluminium reacts with water to produce hydrogen gas according to the equation.

Is aluminium a metal?

Aluminium is a silvery-white, lightweight metal. It is soft and malleable. Aluminium is used in a huge variety of products including cans, foils, kitchen utensils, window frames, beer kegs and aeroplane parts. It is the second most malleable metal and the sixth most ductile.

Why is steel cheaper than aluminium?

What are the three properties of aluminum?

This is because of its particular properties. It has low density, is non-toxic, has a high thermal conductivity, has excellent corrosion resistance and can be easily cast, machined and formed. It is also non-magnetic and non-sparking. It is the second most malleable metal and the sixth most ductile.

What is the main useful property of Aluminium alloys?

Pure aluminium is soft, ductile, corrosion resistant and has a high electrical conductivity. It is widely used for foil and conductor cables, but alloying with other elements is necessary to provide the higher strengths needed for other applications.

What are the two classifications of aluminum alloys?

There are two principal classifications, namely casting alloys and wrought alloys, both of which are further subdivided into the categories heat-treatable and non-heat-treatable.

2. What is the atomic mass of aluminium?

3. Aluminium belongs to which period?

4. Aluminium belongs to which group?

Ans: Aluminium is a group 13 element.

Test your knowledge on aluminum!
Q5