What are the Isotopes of Hydrogen?

Hydrogen is the first element in the periodic table and has the atomic number one. Those elements which have the same atomic number but a different mass number are called isotopes. There are three isotopes of hydrogen namely, protium 1H1, deuterium 1H2 or D and lastly tritium 1H3 or T. The isotopes are different because of the different number of neutrons present in them.

In protium, there is no presence of neutrons, whereas in deuterium we have one neutron and in tritium, we have two neutrons. The most prominent form of hydrogen is protium, 0.0156% of hydrogen is present on the earth’s surface as deuterium. In tritium, the concentration is one atom per 1018 atoms of protium. Out of these three isotopes of hydrogen, 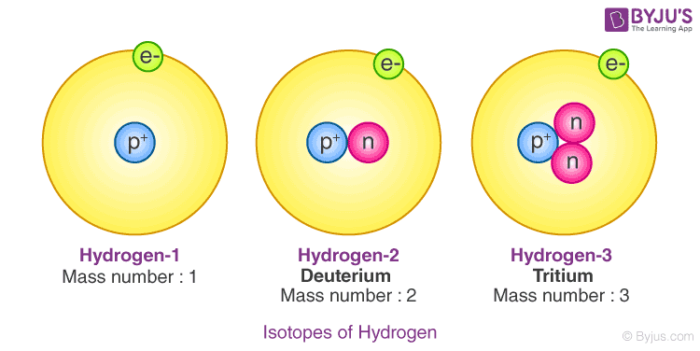 Out of these three isotopes of hydrogen, the only tritium is radioactive in nature which emits low energy b particles. As the electronic configuration of isotopes is the same, they all have similar chemical properties. But they have a difference in their rates of reaction, this happens because of the different bond disassociation enthalpies. They have different physical properties because of the large variations in mass.

The occurrence of hydrogen on earth is difficult due to its light nature. In combined it forms 15.4% hydrogen occurs in the earth’s crust and oceans. Hydrogen also occurs in plant and animal tissues, hydrocarbons, proteins, hydrides, and many other compounds. In the universe, hydrogen is the most abundant element (70% of the total mass) and it is also the principal element of the solar atmosphere. Even the huge planets such as Jupiter and Saturn mainly consist of hydrogen.

It is one of the common isotopes of hydrogen. It is plenty in nature with an abundance of 99.98%. One of the reasons for this is that the nucleus of this isotope consists of a single proton and this proton at no time, it has been reported to be decayed. Mass of protium is 1.007825 amu. Hydrogen generally combines with other atoms in compounds and are usually found in H2 ( diatomic hydrogen gas).

It comprises 1 proton and 1 neutron in its nucleus. The nucleus of hydrogen 2 is termed as deuteron. It is not radioactive. Its compounds are used in chemical analysis and solvents for hydrogen 1. Heavy water is enriched with molecules consisting of deuterium instead of protium. It used as a coolant and a neutron moderator. Hydrogen 2 is also used as a fuel in nuclear fusion (commercial). It occurs naturally as deuterium gas.

It comprises 2 neutrons and 1 proton in its nucleus. Small traces of hydrogen 3 or tritium occurs in nature due to the synergy of cosmic rays with atmospheric gases. They are also released in a small amount at the time of nuclear weapons tests. It is radioactive, it decays into helium 3 through beta decay. Hydrogen 3 as an atomic mass of 3.0160492 u.

It comprises 1 proton and 3 neutrons in its nucleus. Hydrogen-4 is a highly unstable isotope of hydrogen. It is incorporated in laboratories bombarding tritium with fast-moving deuterium nuclei. Its atomic mass is 4.02781 ± 0.00011.

It comprises 4 neutrons and 1 proton. Hydrogen-5 is a highly unstable isotope of hydrogen. It has been incorporated in the laboratory by bombarding tritium with fast-moving tritium nuclei.

It has a half-life of 290 yoctoseconds. It decays through triple neutron emission into hydrogen-3.

It comprises 6 neutrons and 1 proton. It has a half-life of 23 yoctoseconds.

How many isotopes are in hydrogen?

Which isotopes of hydrogen are radioactive?

Is Protium an isotope of hydrogen?

Protium is the hydrogen’s most common isotope. It accounts for more than 99.98 percent of all universe hydrogen. Because its nucleus has only one proton, it is called protium. The atomic mass of Protium is 1.00782504(7) u.

Are all isotopes are radioactive?

Radioactive isotopes are types of chemical elements formed by the natural decay of atoms. Radiation exposure is generally considered hazardous to the human body, but in medicine, radioisotopes are highly valuable, particularly in disease diagnosis and treatment.

Test your Knowledge on Isotopes of hydrogen!
Q5