Structure of a Nuclear Power Plant

A steam turbine is used to convert the heat contained in steam into mechanical energy. The generator in a nuclear power plant converts kinetic energy supplied by the turbine into electrical energy. The cooling system removes heat from the reactor core and transports it to another area of the station, where the thermal energy can be harnessed to produce electricity or to do other useful work. 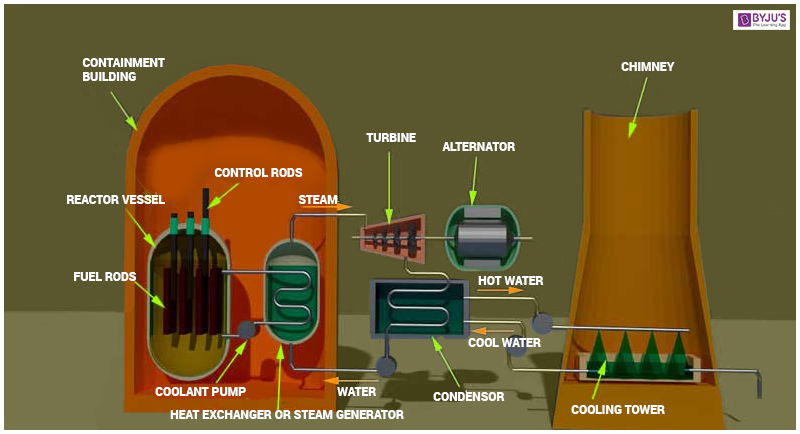 In the case of an emergency, safety valves can be used to prevent pipes from bursting or the reactor from exploding. The water level in the steam generator and the nuclear reactor is controlled using the feed water system. Most nuclear stations require two distinct sources of off site power feeding station service transformers that are sufficiently separated in the station’s switchyard and can receive power from multiple transmission lines.

The element uranium is used as fuel in nuclear reactors for the chain reaction to occur. Uranium is a very heavy metal mostly found in seawater & rocks.

In India, Nuclear power is the fourth-largest source of electricity. There are 21 nuclear reactors in operation in 7 nuclear power plants (as per 2013 reports). India has been working on thorium-based fuels to design and develop a prototype for an atomic reactor using thorium and low-enriched uranium.

Stay tuned with BYJU’S to get more information on nuclear reactors, nuclear power plants in India and other related topics.