What is Ammonium Nitrate?

Ammonium nitrate is an ionic salt made up of the ammonium cation (NH4)+ and the nitrate anion (NO3)–. The chemical formula of this compound is NH4NO3.

This compound features an ionic bond between an ammonium ion and a nitrate ion. The structure of an NH4NO3 molecule is illustrated below. 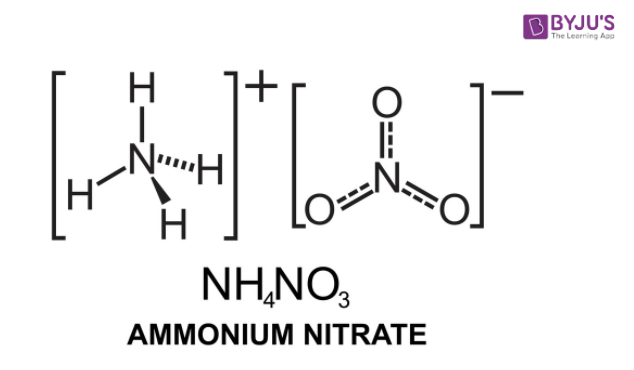 Ammonium nitrate readily dissolves in water by dissociating into its constituent ions. This salt is acidic in nature since it is derived from a weak base (NH3) and a strong acid (HNO3).

NH4NO3 can be prepared from the acid-base reaction between nitric acid and ammonia, described by the following chemical equation:

This reaction is highly exothermic and proceeds violently. Ammonium nitrate is also known for its oxidizing powers. It is widely used in many explosives used in the mining and construction sectors. NH4NO3 is also one of the key components of ANFO, one of the most popular choices of industrial explosives.

Some important applications of this ionic salt are listed below.

Despite its numerous applications, the use of this compound is being slowly phased out by the governments of many countries due to its scope for misuse. Ammonium nitrate was one of the key ingredients of the explosives that were used in the 2011 Delhi bombings and the 2013 blasts in Hyderabad.

What is ammonium nitrate used for?

Used to make fertilizers and explosives, and as a nutrient in antibiotic and yeast growth. Ammonium nitrate is the nitric acid ammonium salt. It has a function as a fertilizer, an oxidizing agent and an explosive.

Is ammonium nitrate a base or acid?

Ammonium nitrate is not acid but a salt but the solution is acidic since it is a salt with a weak base (ammonium hydroxide) and a heavy nitric acid.

What happens when you mix water and ammonium nitrate?

What can you do with ammonium nitrate?

Ammonium nitrate is a chemical compound used as a fertilizer in agriculture, for producing pyrotechnics, as an ingredient in cold packs, and for scientific demonstrations. This is also used in mining and quarrying to produce controlled explosions.

Is ammonium nitrate a good fertilizer?

Ammonium nitrate fertilizer is the compound’s most common application but it also has a very volatile quality, making it useful in some industries. The use of ammonium nitrate in gardens and large-scale growing fields stimulates plant growth and provides a ready source of nitrogen that plants can draw from.

To learn about other ionic compounds of the nitrate anion, such as potassium nitrate, register with BYJU’S and download the mobile application on your smartphone.