Non-metals are the elements which form negative ions by accepting or gaining electrons. Non-metals usually have 4, 5, 6 or 7 electrons in their outermost shell.

Non-metals are those which lack all the metallic attributes. They are good insulators of heat and electricity. They are mostly gases and sometimes liquid. Some of then are even solid at room temperature like Carbon, sulphur and phosphorus.

The following are the general properties of non-metals.

A non-metal does not react with water but it is usually very reactive in air, which is why some of them are stored in water. For example, one of the highly reactive non-metals is phosphorus and it catches fire when exposed to air that is why it is stored in water to prevent its contact with atmospheric oxygen.

None of the non-metals is known to react with acids.

When sulphur reacts with oxygen, we get sulphur dioxide.

When sulphur dioxide reacts with water it forms sulphurous acid. 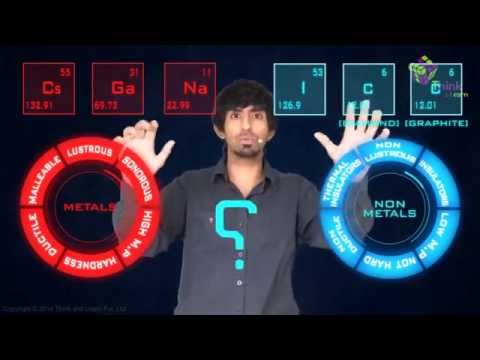 What are examples of non-metals?

A chemical element (such as boron, carbon or nitrogen) that lacks metal properties and is capable of forming anions, acid oxides, acids, and stable hydrogen compounds.

What are non-metal and metal?

What are non-metallic materials?

Non-metals are natural materials that do not produce heat or electricity and that are structurally brittle (can not be easily rolling, moulding, extruding or pressing). Hydrogen, carbon, nitrogen, oxygen, phosphorus, arsenic and selenium are the non-metallic elements in the periodic table.

What is called ductility?

Ductility is a measure of the ability of a metal to withstand tensile stress — any force that separates the two ends of an object from each other. Literally, the word “ductile” means a metal material can be stretched into a thin wire without being weaker or more fragile in the process.

For elements, the term metal and non-metals are used. Plastic is not an element but a polymer consisting of various non-metals such as carbon, hydrogen, oxygen, nitrogen and so on. Not all plastic can be deformed, either.

What is a liquid metal called?

Liquid metal is composed of alloys with very low melting points that form a liquid eutectic at room temperature. The main metal used to be mercury, but in different applications, gallium-based alloys, which are lower in both their vapour pressure at room temperature and toxicity, are used as a replacement.