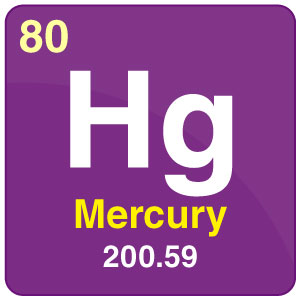 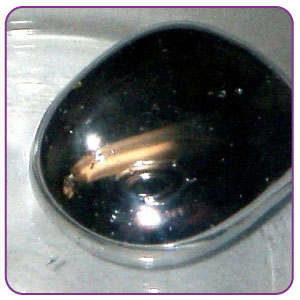 Mercury is a chemical element and the only common metal which is liquid at ordinary temperatures. It is commonly known as quicksilver and is heavy, silvery-white liquid metal. Mercury is a transition metal, where one of the elements found between Group 2 (IIA) and 13 (IIIA) on the periodic table.

As a chemical element, mercury cannot be created or destroyed. The same amount has existed on the planet since the earth was formed. Mercury, however, can cycle in the environment as part of both natural and human activities. Mercury metal also found many new applications in electrical devices and electrochemistry. Mercury metal is a volatile liquid; it has a measurable vapor pressure at room temperature.

Mercury is a liquid metallic element of many useful applications. It is also an element with properties hazardous to the environment and workplace, and corrosive to many materials. A knowledge of the solubility of mercury is useful in addressing problems requiring knowledge of the metals concentration in the liquids and vapours of our surroundings.

Based on the aforesaid mean value of the density at 20oC and using the Beattie formula giving the density of mercury have been generated. Apart from thermometry, mercury is used as a reference standard for determining the volume of small capacity measures and to maintain the primary standard barometer. In either case, the temperature range of interest is 0-41oC, so the density values have been calculated in steps of 0.1oC in this range. The value for the density of mercury refers to an ambient pressure of 101325 Pa.

Mercury element has been known for thousands of years. People learned to make this metal from the most important ore called Cinnabar. The Cinnabar releases mercury as a vapour when heated; later the vapour is cooled and captured as liquid mercury. 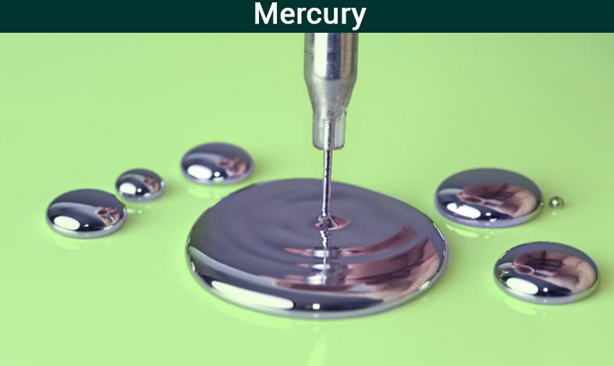 Symbol of Mercury in Periodic Table

Mercury element in the periodic table is symbolized as Hg.

Mercury metal can be frozen changed into a solid at a temperature of –38.85°C. It can be transformed into a gas when boiled at 365.6°C. The density of mercury is 13.59 grams per cubic centimetre.

It has two physical properties of special interest.

Surface tension is a property of liquids that makes them act like they are covered with skin. While being a good conductor of electricity, this property is used in a mercury switch kind of turns light on and off.

Mercury is a very good electricity conductor, too. In a variety of functional products, this property is used. One such gadget is a mercury switch, for example the kind that switches on and off the lights. You should put a small amount of mercury into a tiny glass capsule.

In order to tip back and forth, the capsule may be made. The mercury runs from one end to the other as it tips. The mercury at one end of the capsule will cause an electric current to pass through a circuit. At the other hand, no mercury is present, so no current will pass. Mercury switches are simple and very quick to produce.

Mercury is moderately active. It does not react with oxygen in the air. It reacts with some acids when they are hot, but not with most cold acids.

The mercury compounds have many uses:

Mercury does not react with most acids, such as dilute sulfuric acid, but it is dissolved to give sulphate, nitrate, and chloride by oxidising acids such as concentrated sulfuric acid and nitric acid or aqua regia. Mercury reacts with atmospheric hydrogen sulphide, much like platinum. Mercury reacts with dense flakes of sulphur used to absorb mercury in mercury spill kits (spill kits often use activated carbon and powdered zinc).

Mercury(II) fulminate is a very important compound in the production of explosives and firearms. This compound is commonly used in weapons as a primer of the cartridge. Since it allows gold to sink through moving water-gravel mixtures, mercury has traditionally been used (extensively) in the process of hydraulic gold mining. Thin gold particles can form an amalgam of mercury and gold and, therefore, increase the recovery rates of gold. In the 1960s, large-scale mercury use ceased (due to its toxicity). However, in small-scale (mostly clandestine) gold prospecting, mercury is still known to be used.

Solved Example on Density of Mercury

A 20ml sample of mercury has a mass of 271g. Calculate the density of mercury.

This question tests the knowledge of a basic equation. Though the equation is simple one should be able to manipulate this equation so that one can connect this piece of information with other facts and formulas that are given in the passage.

Is Mercury dangerous to touch?

Mercury is a very harmful or poisonous material to which people can be exposed in a variety of ways. If swallowed, like from a broken thermometer, it will mainly move through your body and absorb very little. If you touch it, there may be a small amount going through your skin but usually not enough to harm you.

How is mercury found in nature?

In nature, mercury is rarely present as the pure, liquid metal, but rather in compounds and inorganic salts. Mercury is extracted as mercury (cinnabar ore) sulphide. Cinnabar deposits have been the source ores for the commercial exploitation of metallic mercury throughout history.

What is special about the Mercury element?

Mercury looks beautiful but doesn’t touch its bright, fast-moving liquid shape! It can be highly harmful to humans. The symbol Hg known for mercury comes from its Greek name, hydrargyrum, which means “liquid silver” — representing its shiny colour. Mercury is a highly toxic constituent.

What mercury is used for?

Mercury can be used to produce thermometers, barometers, and other scientific tools. Mercury conducts electricity, and is used to make switches dependent on position and silence. Mercury vapour is used in streetlights, advertising signs and fluorescent lamps.

When was the element mercury discovered?

We have no idea who invented it. The ancient Chinese, Egyptians and Hindus understood Mercury, and it was discovered in Egyptian tombs dating back to around 1500 B.C. In the 4th Century B.C. We note Aristotle in writing referred to mercury as ‘hydro-argyros’ – which translates as liquid-silver or water-silver.

Test your Knowledge on Mercury!
Q5