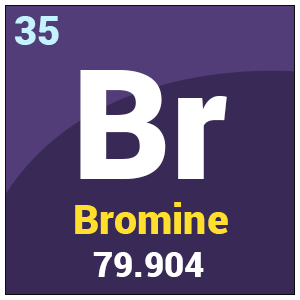 It is the third-largest halogen and at room temperature, it appears as a fuming red-brown liquid. Bromine was discovered by two chemists independently.

Some major uses of bromine have been discussed below:

What are the uses of bromine?

Several compounds of bromine are very important commercially. A wide variety of organobromine compounds have several industrial applications. Some are prepared from bromine and others are produced from hydrogen bromide (a bromine compound with the formula HBr), which is obtained by burning hydrogen in the presence of bromine. Both alone or in combination with silver iodide and silver chloride, silver bromide is widely used as the light-sensitive component in most photographic emulsions

Elemental bromine is extremely toxic to the human body and is known to cause chemical burns on skin and flesh. Similar inflammation of the respiratory tract can occur as a result of the inhalation of bromine gas. The inhalation of elemental bromine in the gaseous form can lead to coughing, shortness of breath, choking, and (if inhaled in a large enough quantity) death. Chronic exposure can lead to repeated bronchial infections and worsening of the overall health of the human body.

What safety measures are usually taken while handling bromine?

Bromine is incompatible with almost all organic and inorganic compounds since it behaves as a very powerful oxidizing agent. Strict caution must be taken whilst transporting bromine. This element is usually transported with the help of steel tanks that are filled with lead and are protected by strong metal frameworks.

How does bromine compare to other halogens?

Test your knowledge on bromine
Q5