In simple terms, we can define colloids as a mixture where one of the substances is split into very minute particles which are dispersed throughout a second substance. The minute particles are known as colloidal particles.

Alternatively, we can also say that colloids are basically solutions in which solute particle size ranges from 1nm – 1000 nm. Colloids are heterogeneous in nature.

Stable colloids are also known as lyophilic sols, in these strong forces of interaction exist between the dispersed phase and the dispersion medium. These are prepared by the following suitable methods.

In this method, small solute particles are condensed to form a dispersed phase particle.

Colloidal sulphur can be obtained by passing oxygen gas through a solution of hydrogen sulphides. In this method any oxidising agent like HNO3, H3Br2 can also be used.

b) By double decomposition:

A solution of arsenic sulphide is obtained in this method. In this process hydrogen sulphide is passed through Arsenious oxide cold solution in water.

A number of metals such as gold, silver, and platinum are obtained in a colloidal state by reacting the aqueous solution of these salts with suitable reducing agents such as formaldehyde, phenylhydrazine, hydrogen peroxide, stannous chloride etc.

The gold sol prepared in the reduction of gold chloride solution has a purple colour and is called purple of Cassius.

Many salt solutions are rapidly hydrolysed by boiling a dilute solution of their salts. For example, ferric hydroxide and aluminium hydroxide sols are obtained by boiling solutions of the corresponding chloride.

Silicic acid sol is obtained by the hydrolysis by sodium silicate.

A sol of arsenic sulphide is obtained in this method. In this process hydrogen sulphide is passed through Arsenious oxide cold solution in water.

h) By exchange of solvent:

i) By change of physical state:

Sols of substance like mercury and sulphur are prepared by passing the vapour through cold water containing a suitable stabilizer such as ammonium salt or citrate.

In these methods, large particles of a substance (suspension) are broken into smaller particles. The following methods are employed.

In this method, the substance is first grounded to coarse particles. It is then mixed with dispersion medium to get a suspension. The suspension is then grinded in a colloidal mill. 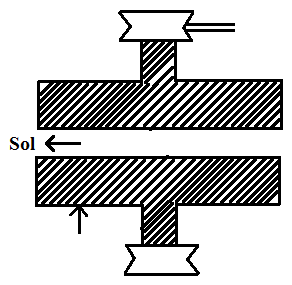 It consists of two metallic dyes nearly touching each other and rotating in the opposite direction at a very high speed 7000 revolution per minute. The space between the dyes of the mill is so adjusted that coarse suspension to great shearing force giving rise to particles of colloidal size. Colloidal solution of black ink, paints varnishes dyes are obtained by this method.

b) Bredig’s Arc Method or by Electrical Dispersion

This method is used to prepare sols of platinum, silver copper or gold. The metal whose sol is to be prepared is made as two-electrode which immersed in a dispersion medium such as water etc. 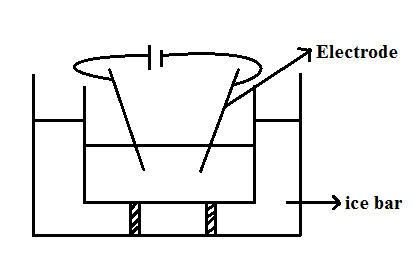 The dispersion medium is kept cool by ice. An electric arc is placed between the electrodes. The tremendous heat generated by and give colloidal solute. Electrolytes are used for this process for stabilization and cooling.

1. Freshly prepared ferric hydroxide can be converted into the colloidal state by shaking it with water contains Fe3+ or OH– ions i.e. FeCl3 or NH4OH respectively.

2. A stable sol of stannic oxide is obtained by adding a small amount of dilute HCl to stannic oxide precipitate similarly a colloidal solution of Al(OH)3 and AgCl are obtained by treating the corresponding freshly prepared with a very dilute solution of HCl and AgNO3 or KCl respectively.

Colloids contain ionic impurities and other categories of impure substances that decrease the quality of colloids used in various applications. Following are the methods to purify the colloids.

Method of separation of ionic substances from the colloidal solution by means of effusion through a suitable membrane is dialysis. The principle is that sol particle cannot pay through parchment paper or semipermeable membrane due to the impurity slowly diffused out of the base leaving pure colloid.

The distilled water in the container where a bag is immersed should be changed frequently to prevent the accumulation of crystalloids otherwise there is a possible change of diffusing back of impurities into the bag.

Dialysis is a slow process and takes so much time for the removal of impurities. The process is improvised by an applied electrical force. This is known as electrodialysis. In this method two electrical plates are inserted into the distilled water and are connected to the terminals of source, long moves to the opposite electric plate with greater speed and the sol is purified. 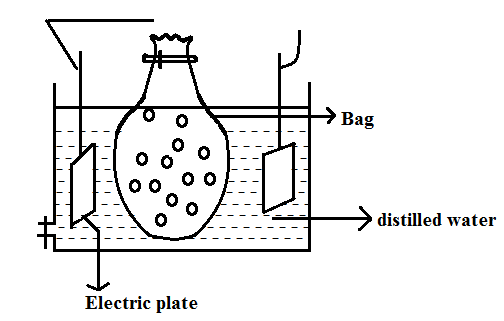 Normal filter papers cannot be used to filter the impurities of colloid since due to the large size of pores, impurities along with sol particle will be filtered off. The pore size is reduced by impregnating the papers in collodion solution which is 4 – s. Calculate nitrate solution in alcohol – ether mixture and dried with acetaldehyde. This is known as ultrafiltration and such papers are known as ultrafilter papers.

A respiration pigment which has albumin protein in water. Pigment part contains albumin that acts as the dispersed phase and the dispersion medium is water. It is a hydrosol.

It contains air which is the dispersion medium and droplets of water as a dispersed phase. These are aerosol.

It is a metallic sol in which gold particles are dispersed in the water.

Colloids are widely useful in industries, medical and domestic applications.

As food items: Syrup, Halwa, Soup belongs to a colloidal type of system.

Medicine: Colloidal silver in the name of Argyrols, it acts as antiseptic for eye infection.

In Purification of air by Cottrell precipitator:

This process involves coagulation of solution particle. Dust or smoke is passed through the inlet of an electrified chamber which has a central electrical plate which is provided with opposite charge of a dent a smoke particle when dust passes the particles are coagulated and pure air is passed through another outlet.

Animal skins are very soft, when these are immersed in the solution of tannin which has the opposite charge of animal skin, particles are coagulated and the skin becomes hard this is known as tanning of leather.

It involves coagulation of clay particles of the river with an electrolyte of seawater.

Colloids are classified into many types.

Classification Based on Physical State

In this dispersed phase solid and the dispersion medium. Eg: gemstones.

These colloids consist of air as the dispersion medium.

Example 1: Cloud. This contains air as dispersion medium and water drops as the dispersed phase.

Example 2: Dust. This contains air is dispersion medium and dent particle as the dispersed phase.

Example 3: Smoke. This contains carbon particles in the air.

These are liquid-liquid solutions in which the dispersed phase is liquid and liquid dispersed medium. Emulsion mainly consists of two aspects.

Oil is dispersed phase and water is dispersion medium

Water is the dispersed phase and oil/fat is dispersion medium.

Sols and gels are reversible and interconvertible. This is known as thixotropy.

Classification Based on Dispersion Medium

On the basis of dispersion medium sol are classified as;

In these colloids water act as a dispersion medium.

In this type, alcohol acts as a dispersion medium.

These contain a dispersed phase particle in the air.

Classification Based on Interaction Forces

On the basis of interaction forces between the dispersion medium and dispersed phase.

a) Surface Tension: It is same as that of the medium.

b) Viscosity: It is the same as that of the medium.

c) Irreversible: These are irreversible colloids when once dispersion medium is evaporated and again when the solvent is added no new sol is formed.

d) Stability: There is weak interaction between the dispersed phase and dispersion medium hence lyophobic sols are unstable.

f) Migration: Particle migrates either colloid an anode depending upon the charge of sol particle.

g) Action of electrolyte: When the electrolyte is added to sol, coagulation takes place.

These are stable strong sols. A strong interaction is present between the dispersed phase and the dispersion medium. Following are the characteristics of lyophilic sols.

a) Surface tension: Lower than that of the medium.

b) Viscosity: Higher than medium.

c) Reversibility: These are reversible sols. When dispersion medium is evaporated and the solvent is added again the same type of sol is formed.

d) Stability: More stable due to strong interaction between the dispersed phase and the dispersion medium.

e) Visibility: The particleS are visible under an electron microscope.

Classification Based on Properties of Sol Particle

Classification of sols on the basis of properties are given as;

When a dissolution occurs atoms or smaller molecules of substance [having a diameter less than 1nm] aggregate together to form particles of colloidal dimensions. The particles thus formed are called multimolecular colloids.

In these sols, the dispersed phase consists of aggregates of atoms or molecules with a molecular size less than 1 atm. For example sols of gold atoms and sulphur (Sf) molecules. In these colloids, the particles are held together by physical forces called Van der Waals forces. Metallic sols are usually multimolecular sols prepared by Bredig’s are melted. These are usually lyophobic unstable, and separation is early possible.

1. What is the major difference between lyophilic and lyophobic sols?

In lyophilic sols, there is a strong interaction between the dispersed phase and dispersion medium, highly stable and resistant to coagulation. Lyophobic sols are unstable weak unstable Van Der Waals forces of attraction between dispersed phase and dispersion medium due to these forces these are irreversible and ready to coagulate.

2. What are gels? Give an example.

Gels are a type of sols in which solid is dispersion medium and liquid is dispersed phase, these are stable at comparatively low temperature.

3. Give an example of multimolecular colloids.

Multimolecular colloids are formed by the aggregation of sol particles which are relatively smaller in size.

4. Give examples of macromolecular colloids.

These are generally biomolecular such as enzymes or protein which are quite bigger in size when immersed in a suitable dispersion medium, their particle aggregate to form sols.

5. Why dialysis is not the best method for the purification of colloids?

Separation of ionic impurities which are dissolved in sol by a semi-permeable membrane is dialysis. If there is prolonged dialysis all the ionic impurities are removed and sol particles are gathered together, neutralized lead to precipitate.

Bredigs are dispersion method is used to prepare metallic sols like gold sol. In this method, metallic particles are broken into the size of sol particles and immersed in a suitable dispersion medium to form sols.

7. Which phenomenon of colloids involves the formation of a delta?

Coagulation or flocculation is involved in the formation of the delta. The river contains clay particle when combined with seawater with electrolyte due to the presence of opposite ions clay particle gets coagulated and forms delta.

8. A small amount of electrolyte is needed for the formation of sol white large amount is required for coagulation of sol comment.

9. Name the substance used to reduce the pore size of filter paper during ultrafiltration.

In ultrafiltration, normal filter paper cannot be used due to large pore size. The size of pores is reduced by using collodion solution which is 4% cellulose nitrate solution in alcohol ether mixture.