Emulsions are the mixtures of two or more type of liquids where, one is such as droplets, of tiny or even ultramicroscopic size, which are distributed throughout each other. These are usually formed from the component of liquids either in natural form or, more often, using mechanisms such as the agitation, which is provided that these fluids mixed have no kind of mutual solubility.

Emulsions are said to be stabilized by some agents forming films at the surface of droplets or those which impart to them a kind of mechanical stability. The unstable form of emulsions eventually separates into two forms of liquid layers. The stable emulsions are destroyed by destroying or by deactivating the emulsifying agent—for example by the addition of appropriate third party substances or even by the process of freezing or by heating.

An emulsion can be defined as a colloid consisting of two or more non-homogenous type of liquids wherein one of the liquid contains the dispersion of the different form of liquids.

The term emulsion is also applied to a group of mixed systems called as solutions, or gels or suspensions. Take, For example, the photographic emulsion is a gelatin gel consisting of tiny crystals dispersed in it. Some other examples of emulsions include butter which is an emulsion of water in fat and egg yolk containing lecithin.

Emulsions can be classified on the basis of the properties of the dispersed phase and the dispersion medium.

These are substances which are added to emulsions for stabilization purpose. The various characteristics of emulsifiers are given below:

How do Emulsifiers Work?

To understand this, firstly we need to understand the process of coalescing. Coalescing is the process in which the similar particles in the emulsions come together to form larger and bulkier particles leading to the separation of the dispersed phase and dispersion medium.

Emulsifiers help in preventing coalescing by forming a physical barrier between the dispersed phase and dispersion medium. As we have seen before emulsifiers, like soap, has both a hydrophilic end and a hydrophobic end. Hence, they can attach to both polar and non-polar substances. Let us take the example of sodium stearate. C17H35COO–Na can be represented as;

When this is added to an o/w emulsion, molecules of C17H35COO– surround the oil droplet with their non-polar tails/hydrophobic end (the hydrocarbon chain) extending into the oil & their polar heads/hydrophilic end (the carboxylate ion) facing the water as given in the figure. 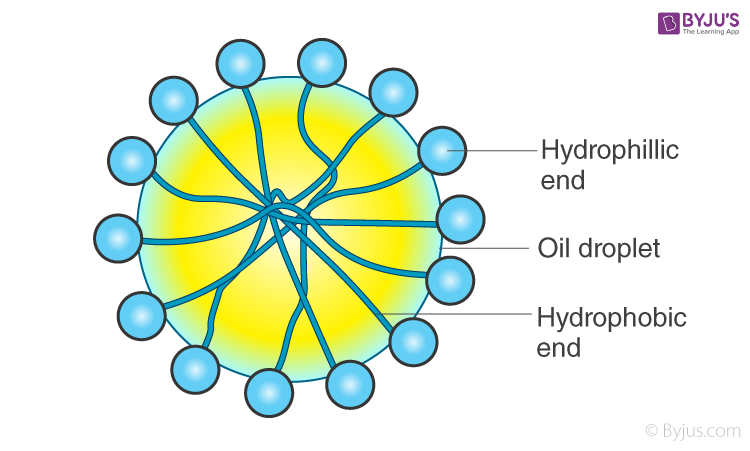 For w/o emulsion, the orientation of the emulsifier would be the opposite as that of o/w. i.e. non-polar (hydrophobic end) tail extends outside and polar (hydrophilic end) head faces inwards.

Since there are different processes and mechanisms (both chemical and physical) involved in the process of emulsification, there are several theories that accompany it.

Surface Tension Theory: This theory states or describes emulsification as a process that occurs by the reduction of interfacial tension between two phases.

Repulsion Theory: With this theory, we learn that the emulsifying agent produces a film over one phase which further leads to the formation of globules. These compounds tend to repel each other and the repulsive force that exists between them help them to remain suspended in the dispersion medium.

Methods to Identify the Type of Emulsions

On adding water to an o/w emulsion, it will still remain stable as water is the dispersion medium, but on adding oil it will get destabilized as oil & water are immiscible. Similarly, w/o emulsion can be diluted with oil & would still be stable, but would get destabilized on the addition of water. 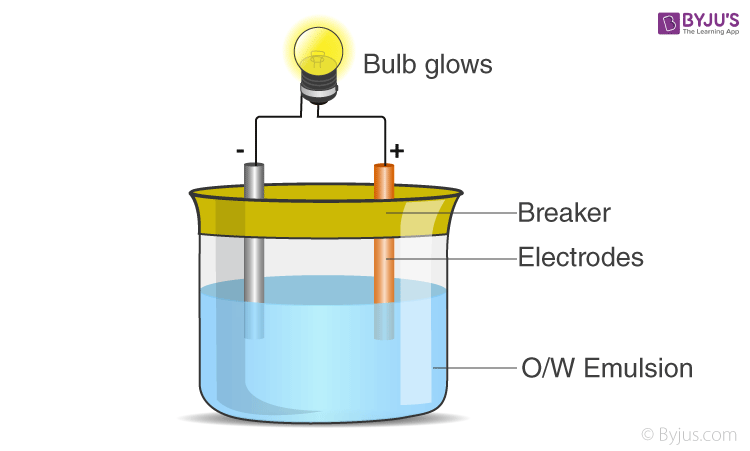 In this, a water-soluble dye is added to the emulsion. If it is an o/w emulsion, the dispersion medium appears red and the dispersed phase colourless and vice-versa.

The different methods by which emulsions can be separated into its constituent liquids include;

Applications and Uses of Emulsion

Emulsions are very much famous in various fields of science. It is utilized in the tanning and dyeing industries, used in the manufacturing process of plastics and synthetic rubber.

No, emulsions are a non-homogeneous colloidal mixture of two immiscible liquids.

Give an example of an emulsion.

Butter is an example of emulsion.

What are the two types of emulsions?

The two types of emulsion are:
1. Water in oil emulsion
2. Oil in water emulsion

What is the use of an emulsifier?

An emulsifier is a substance that stabilizes emulsions.