Thin-film interference is a common occurrence that happens in our everyday lives. For instance, you must have noticed some rainbow-coloured reflection in a pool of water on the side of the road or in a bubble. This observable effect is known as thin-film interference.

It occurs mostly when light is reflected several times off (interference) the sides of thin transparent material.  However, this is a simple explanation. We shall study more in-depth about this concept below.

What is Thin Film Interference?

Thin-film interference is the phenomenon that is a result of lightwave being reflected off two surfaces that are at a distance comparable to its wavelength. When light waves that reflect off the top and bottom surfaces interfere with one another we see different coloured patterns. During this, the light reaches the boundary between two media and part of it gets reflected and some part gets transmitted. 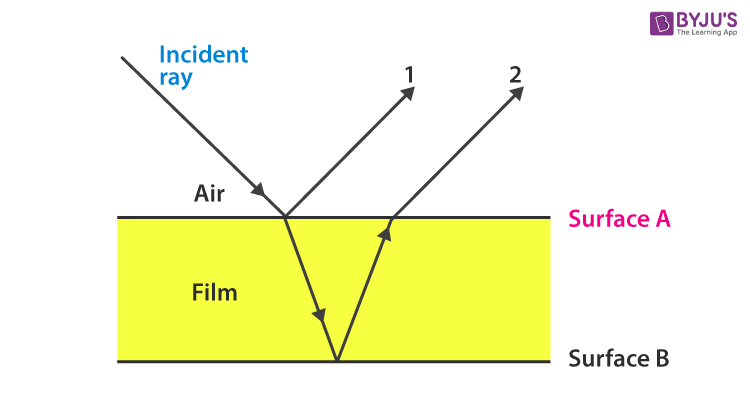 Meanwhile, the type of interference that can take place is dependent upon these factors.

We will look at the major conditions for interference and get a better idea of the concept.

The form of reflection undergo by the light waves at each boundary depends on the refraction indexes of the two mediums.

Soft reflection: Reflects off a medium with a lower refraction index, as a result, no phase shift is observed.

Hard reflection: Reflects off a medium with a higher refraction index, as a result, a phase shift is observed of λ/2.

In this case, there is no phase change due to reflection at A and B because in both cases light is travelling from denser to rarer medium. Thus, the effective path difference between transmitted rays is also 2µt cos r.

In this case, the phase difference between the waves is 180 degrees. Therefore,

t is the thickness of the thin film

λn is the wavelength in the medium.

The phase angle is the part of one complete wave cycle measured as a fraction of 2π (360 degrees) i.e the phase difference from one wave peak to the next is 2π (360 degrees).

The relation between phase difference and path difference is that they are directly proportional to each other.

The interference can be constructive or destructive depending on the phase difference between the two reflected light waves, resulting in the increase or decrease in the brightness of the reflected light. 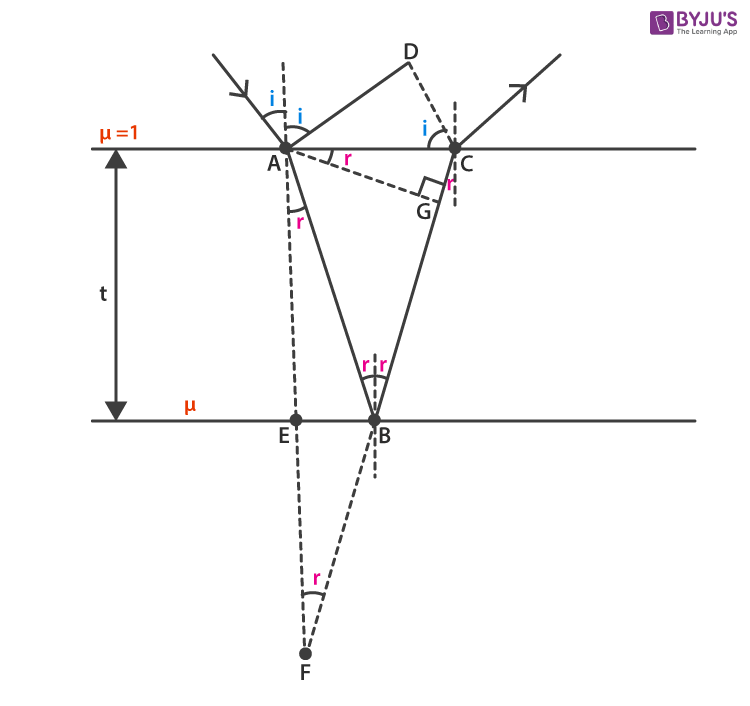 From the geometry of the triangles AEB, AFB, ABC, and ACF,

where t is the thickness of the thin film

When we take a soap bubble, light waves travel through the air and hits the soap film. If we look at the refractive index of air it is 1(nair = 1) whereas the film will have an index larger than 1 (nfilm > 1).

On the other hand, a 180° phase shift will be introduced in the reflected wave. It takes place at the upper boundary of the film. The shift occurs mainly because of the lower refractive index of the air than that of the film.

Further, light from the upper air-film interface will keep moving to the lower film-air interface where it is reflected. Here, the phase of the reflected wave is not changed.

1. A thin film of soap solution is illuminated by white light at an angle of incidence i = sin-1(4/5). In the reflected light, two dark consecutive overlapping fringes are observed corresponding to wavelengths 6.1 x 10-7 m and 6.0 x 10-7 m. The refractive index for soap solution is 4/3. Calculate the thickness of the film.

Given two consecutive fringes are overlapping,

2. A soap film of refractive index 1.33 is illuminated by the light of wavelength at an angle of 45 degrees. There is complete destructive interference. For, find the thickness of the film.

3. The refractive index of the thin soap film of uniform thickness is 1.4. Find the smallest thickness of the film that gives on the inteference maximum in the reflected light of wavelength 5460 amstrong fall at normal incidence.

μ = Refractive index of the film relative to the surrounding

t = Thickness of film and
r = Angle of refraction

The thin-film interference depends on the thickness of the film, light wavelength and the refractive indices.

What is thin-film interference?

The phenomenon of thin-film interference occurs when a light wave is reflected off two surfaces at a distance equal to its wavelength. We witness varied coloured patterns as light waves reflecting off the top and bottom surfaces interfere with one another.

What gives the colour to soap bubbles and oil spills?

The emergence of multiple colours of light from soap bubbles and oil films after reflection is due to thin-film interference.