Alkanes are organic compounds that consist of single-bonded carbon and hydrogen atoms. The formula for Alkanes is CnH2n+2, subdivided into three groups – chain alkanes, cycloalkanes, and the branched alkanes.

The simple alkane methane contains one carbon atom and CH4 as its molecular formula. As this compound have just single covalent bonds only, therefore, its structural formula is

In a long chain alkane molecule, additional carbon atoms are attached to each other with the help of a single covalent bond. Each atom is attached to the sufficient hydrogen atoms to develop a total of four single covalent bonds. This long-chain structure is known as octane. An eight-carbon alkane has a molecular formula – C 8H 18 and structural formula-

The list of some Alkanes with the molecular formula and structures are given below.​

1. The Solubility of Alkanes

2. The Boiling Point of Alkanes

3. The Melting Point of Alkanes

Alkanes Formula and its Condensed Structures

An abbreviated way to draw structural formulas in which each vertex and line terminus represents a carbon atom and each line represents a bond.

Formulas of organic compounds present information at several levels of sophistication. Molecular formulas, such as that of octane give the number of each kind of atom in a molecule of a compound. The molecular formula of C8H18 may apply to several alkanes, each one of which has unique chemical, physical and toxicological properties. These different compounds are designated by structural formulas showing the order in which the atoms in a molecule are arranged. Compounds that have the same molecular, but different structural formulas are called structural isomers. 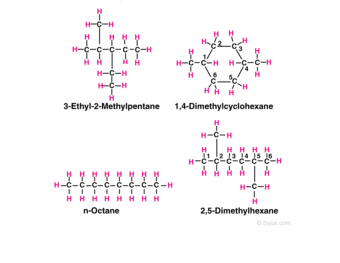 When a substituent like halogen bonds to an alkane molecule, one carbon-hydrogen bond of the molecule gets converted to a carbon-substituent bond. It can be understood with an example- A new compound known as chloromethane is formed when methane reacts with chlorine. The new compound is composed of a CH3 group that is bonded to a chlorine atom.

When an alkane having hydrogen is removed from one bond, it is called an alkyl group. This Alkyl group is often denoted by the letter R the same as halogens represent by the letter X. Here is a methane‐chlorine reaction that can be generalized as

What are the first four alkanes?

How are alkanes classified?

Is alkane a functional group?

What is the general formula of alkyne?

In a homologous series, alkynes are compounds with the general molecular formula of CnH2n‐2.

What is the simplest alkyne?

Alkynes are triple-bond carbon-carbon hydrocarbons. They do not display any geometric or optical isomerism. Ethyne (HC≡CH), frequently known as acetylene, is the easiest alkyne as shown on the right.

Learn more about hydrocarbons and their types by downloading BYJU’S – The Learning App.

Test your knowledge on alkanes!
Q5