Different organic molecules of organic compounds have different properties based upon their structure such as the Cycloalkanes. Did you know about the body fat present in the human body and also some food and hair products are made up of these hydrocarbons? Hence, these organic compounds exist in all the day-to-day examples of life.

Cycloalkanes are the class of hydrocarbons having a ring-like structure. This ring is formed due to their saturated nature, and they have three compounds of alkane present in the structure which helps them in forming a ring. They have the general formula CnH2n ,Where n is said to be the number of carbon atoms present in the organic compound.

These consist of carbon-hydrogen bonds and also carbon to carbon single bonds where these carbon atoms join forming a ring or in the shape of a cyclic structure. Cyclopropane is considered to be one of the smallest cycloalkanes, and most of this class of members are said to be more stable in nature. 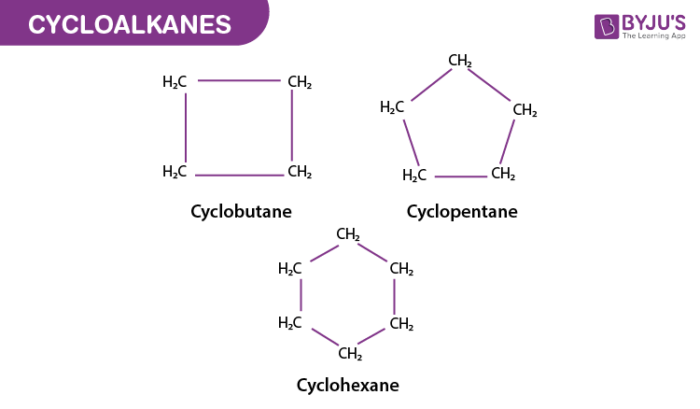 The various physical and chemical properties of Cycloalkanes are given below-

Some uses are given below-

What is a Cycloalkane in chemistry?

Ringed structures called cyclic hydrocarbons may be formed by hydrocarbons. Since they have the least ring pressure, cyclopentane and cyclohexane are the most popular cycloalkanes. Benzene has a ring of delocalized electrons, which gives the structure extra stability.

How do you count Cycloalkanes?

Cycloalkane numbering a When a cycloalkane’s carbons are counted, begin with a substituted carbon such that the lowest numbers (sum) are available for the substituted carbons. b. Number by alphabetical order, whether two or more related substituents are present.

Why is Benzene not called hexene?

Benzene is a molecule with a ring, but hexene is a chain. Alternative carbons in benzene have double bonds, but only one double bond is found in hexene. The benzene molecular formula is C6H6, but C6H12 is hexene.

Does benzene have double bonds?

We would imagine benzene to have reactions like ethene because of the three double bonds – just more so! Ethene undergoes further reactions in which the electrons are used to bind with additional atoms and one of the two bonds connecting the carbon atoms breaks.

Test your Knowledge on Cycloalkanes!
Q5