What is the Octet Rule?

The octet rule dictates that atoms are most stable when their valence shells are filled with eight electrons. It is based on the observation that the atoms of the main group elements have a tendency to participate in chemical bonding in such a way that each atom of the resulting molecule has eight electrons in the valence shell. The octet rule is only applicable to the main group elements.

The molecules of the halogens, oxygen, nitrogen, and carbon are known to obey the octet rule. In general, the elements that obey this rule include the s-block elements and the p-block elements (except hydrogen, helium, and lithium).

The octet rule can be observed in the bonding between the carbon and oxygen atoms in a carbon dioxide molecule, as illustrated via a Lewis dot structure below.

The shared electrons fulfil the valency requirements of both the bonded atoms. Thus, it can be noted that both the oxygen atoms and the carbon atom have an octet configuration in the CO2 molecule.

Upon observing that the noble gases were chemically inert, the electronic theory of valency was proposed by the German physicist Walther Kossel and the American chemist Gilbert Lewis. It was based on the tendency of atoms to assume the most stable state possible.

A few examples detailing the chemical bonding of atoms in compliance with the octet rule can be found in this subsection.

Exceptions to the Octet Rule

Not all elements and compounds follow the octet rule. Some of the exceptions to this rule are listed below.

It can be noted that some electron deficient molecules such as boranes and carboranes follow Wade’s rules in order to obtain stability. These molecules feature 3c-2e bonds (three centred bonds) in which two electrons are shared by three atoms.

Some main group elements have the ability to form hypervalent compounds. Examples include sulfur hexafluoride (SF6) and phosphorus pentachloride (PCl5). If all the phosphorus-chlorine bonds in a PCl5 molecule are covalent, it would imply that the phosphorus molecule is violating the octet rule by holding a total of 10 valence electrons.

The formation of five bonds by the phosphorus molecules can be explained by the sp3d hybridization in PCl5. Here, one ‘s’ orbital, three ‘p’ orbitals, and one ‘d’ orbital undergo hybridization to form an sp3d hybrid. This hybrid orbital forms five covalent bonds with the five chlorine atoms. 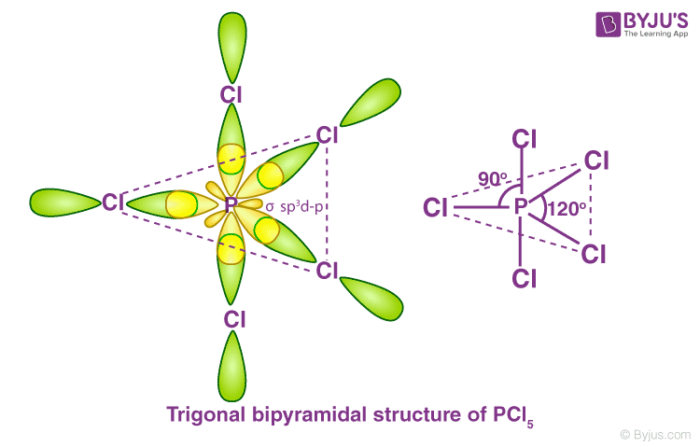 The structure of the hypervalent PCl5 molecule is trigonal bipyramidal, as illustrated above.

How is the Octet Rule Useful?

The chemical behaviour of the main group elements can be predicted with the help of the octet rule. This is because the rule only involves ‘s’ and ‘p’ electrons, where the octet corresponds to an electron configuration ending with s2p6. These elements tend to form bonds in order to obtain stable obtain octet configurations.

Do the Oxygen Atoms in O2 Molecules Have Octet Configurations?

Yes, each oxygen atom in the O2 molecule is surrounded by a total of 8 valence electrons. Oxygen has a total of 6 electrons in the valence shell. In order to obtain a stable octet, the two oxygen atoms share a total of four electrons via a double bond.

List Four Elements that do not Obey the Octet Rule

Since ‘1p’ subshells do not exist, some elements find stability in 1s2 configurations. On the other hand, some elements exhibit hypervalency and have the ability to form hypervalent molecules. Some elements that disobey the octet rule include:

Thus, a brief explanation of the octet rule is provided in this article along with its exceptions. To learn more about concepts related to chemical bonding, such as hybridization, register with BYJU’S and download the mobile application on your smartphone.

Test your knowledge on Octet Rule And Stability Of Atom
Q5