Methylene chloride is a colourless liquid which has a sweet, penetrating, ether-like smell. It is a volatile liquid chlorinated hydrocarbon. It is non-combustible but if exposed to high temperatures it may produce toxic chloride fumes. At higher concentrations vapours are narcotic. It is widely used as a paint remover and solvent. 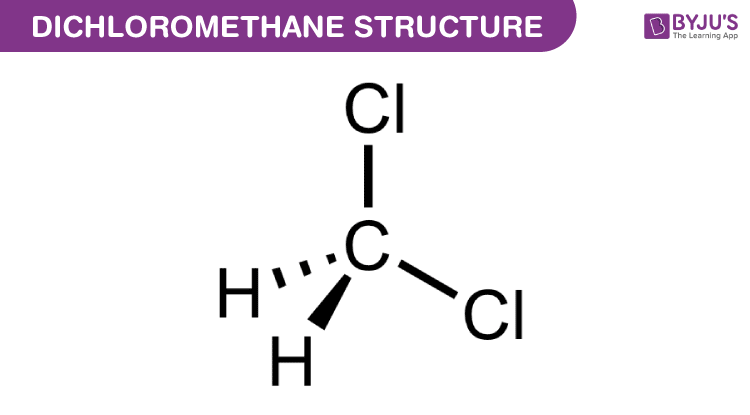 It was first prepared by a French chemist Henri Victor Regnault in the year in 1839. He isolated it from a mixture of chlorine and chloromethane which was exposed to sunlight.

DCM can be synthesized by treating methane or chloromethane with chlorine gas at a temperature range of 400–500 °C. They undergo a series of reactions producing more chlorinated products. In the year 1993, approximately 4,00,000 tons was obtained in countries such as Europe, Japan, and the US.

This process produced a mixture of chloromethane, chloroform, carbon tetrachloride, and dichloromethane. Further, they were separated by the process of distillation.

Inhaling methylene chloride causes irritation in the nose and throat. It affects the central nervous system (CNS). It is a possible mutagen and anticipated to be a human carcinogen.

What are the uses of dichloromethane?

Dichloromethane (often abbreviated to DCM) is a volatile and non-flammable compound that is commonly used as an organic solvent in several applications on the industrial and laboratory scale. This compound is often referred to as methylene chloride due to its high volatility and ability to dissolve compounds.

What are the health hazards associated with dichloromethane?

Dichloromethane is considered by many to be a neurotoxin. It has been proven to cause brain damage and also damage to the central nervous system (abbreviated to CNS). The Environmental Protection Agency (EPA) has also classified this compound as a probable carcinogen towards humans. This is because high levels of exposure to dichloromethane has been proven to cause cancer of the lungs and liver in many animals.

How can dichloromethane be prepared?

Test your Knowledge on Dichloromethane!
Q5