Ethanol is a plant fermentation by product which is natural and it can also be produced through the hydration of ethylene.

Ethanol is an important industrial chemical; it is used as a solvent, in the synthesis of other organic chemicals, and as an additive to automotive gasoline.

Ethanol’s molecular formula is C2H6O, which means it has two carbon atoms and one oxygen atom. The structural formula for ethanol, C2H5OH, provides a bit additional information, indicating that the 2-carbon chain has a hydroxyl group (-OH) at the end. 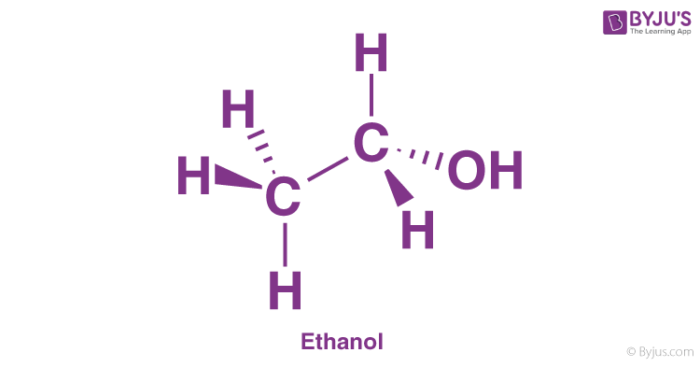 At room temperature Ethanol is always a liquid, and it has a melting point of 156K and a boiling point of 351 K. It is one of the most active ingredients of all the alcoholic drinks. It is also used in making many medicines such as cough syrups, tonics as well as tincture iodine as it is a very good solvent. Any proportion of ethanol is properly soluble in water.

Furthermore, consumption of even a small quantity of pure ethanol is lethal. Consumption of alcohol for a long period causes adverse health effects.

CH3CH2OH can be converted into CH3CHO by

Aldehydes, ketones, and carboxylic acids are formed when alcohols are oxidised. When organic compounds are oxidised, the number of bonds between carbon and oxygen grows, while the number of links between carbon and hydrogen decreases.
Pyridinium chlorochromate (PCC), a combination of chromium trioxide, pyridine, and HCl, produces a high yield of aldehydes while preventing carboxylic acid oxidation.
\(\begin{array}{l}CH_{3}CH_{2}OH \overset{PCC}{\rightarrow}CH_{3}CHO + H_{2}\end{array} \)

When ethanol reacts with sodium it gives hydrogen gas and sodium ethoxide as the final product.

When ethanol is heated at 443 K in presence of excess conc. sulphuric acid then alkene is obtained.

In the above reaction, water is removed by using a dehydrating agent which is sulphuric acid.

How do living beings get affected by alcohols?

The metabolic processes slow down after large quantity of ethanol is consumed. It also depresses the central nervous system. This finally results in lowering of coordination, causes drowsiness etc. Just like ethanol when methanol is taken in a small quantity it can lead to death. When methanol reaches the liver it oxidizes to methanal.

Methanal rapidly reacts with the cells of the human body and it results in causing coagulation of protoplasm, in the same way as the eggs are coagulated. In order to prevent the misuse of ethanol in industries a poisonous substance is added like methanol which makes it unfit for drinking. The addition of methanol to ethanol to make it unfit for drinking is called denaturing.

What are the uses of ethanol?

Ethanol is a very important industrial chemical which is used as a solvent in the synthesis of other organic chemicals and as an additive to gasoline in the automotive industry (forming a mixture called gasohol). Ethanol is also the key component in almost all alcoholic drinks such as beer, wine, and spirits.

Though ethanol is widely used, it is a dangerous chemical. It is highly flammable and as such, it has exact flash points which are crucial to know while using it. Although ethanol is consumed when alcoholic drinks are taken, the ingestion of pure ethanol alone can cause coma and death.

What are the solvent properties of ethanol?

Ethanol is a versatile solvent that is miscible with water and has other organic solvents, including acetone, carbon tetrachloride, ethylene glycol, chloroform, benzene, diethyl ether, glycerol, pyridine, nitromethane, and toluene. Light aliphatic hydrocarbons, such as pentane and hexane, and aliphatic chlorides such as tetrachloroethylene and trichloroethane are often miscible with this compound.

What is ethanol used for at home?

Ethanol mixes easily with water and many organic compounds, and makes an effective solvent for use in paints, lacquers and varnish, as well as personal care and household cleaning products.

What is ethanol used for cleaning products?

Ethanol is an ingredient in paints, lacquers and varnish, as well as cleaning products. For the same reason as ethanol is found in hand sanitisers, so it is used in household cleaning products as it kills the bacteria, fungi and viruses that could be harmful to us.

Test your Knowledge on Ethanol
Q5