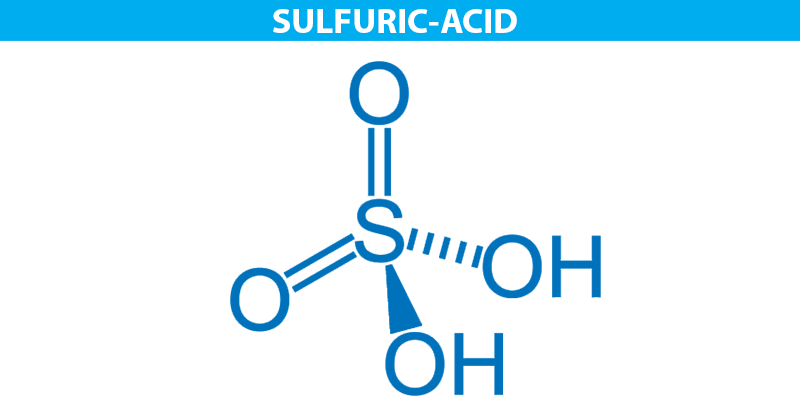 We will first start by addressing the question of what is sulphuric acid. Well, sulphuric acid is basically an oxidizing agent, a strong mineral acid, and a dehydrating agent. Sulphuric acid has the chemical formula H2SO4.

The acid is a colorless liquid. It is soluble in water and generally releases heat on contact. Further, the acid is corrosive in nature to metals and tissues. It will even char wood and most other organic matter on contact, but chances of objects catching fire are null. The acid has a density of 15 lb/gal. Exposure to the acid can result in adverse health effects from inhalation. It depends on the rate of exposure and concentration. That being said, the acid is usually manufactured using a method known as the contact process. Earlier, in this process, a chemical element known as platinum was first used as a catalyst. Later, an inorganic compound known as vanadium oxide replaced platinum due to cost constraints.

In any case, today we will be looking at the contact process in detail.

Steps involved in the manufacturing of sulphuric acid are as stated below:

SO2 is prepared by burning sulphur in the presence of excess air so that the product combines with oxygen which is helpful for the next stage.

Sulphur trioxide is formed when sulphur dioxide reacts with oxygen in a ratio of 1:1 at a temperature of 400°C – 450°C and a pressure of 1-2 atm in the presence of N2O5 as a catalyst. This reaction is reversible in nature.

How Sulphuric acid is produced?

What type of acid is sulfuric acid H2SO4?

Sulfuric acid is a powerful mineral acid that at all concentrations is soluble in water. Sulfuric acid contains two atoms of hydrogen, one atom of sulfur, and four atoms of oxygen. Sulfuric acid H2SO4- A colorless to dark brown liquid that is highly corrosive.

What is the pH of Sulphuric acid?

Aluminum, which is a highly reactive metal, will not dissolve in oxidizing acids (e.g. nitric), as it will grow on its surface a protective layer of aluminum oxide. Thallium, for example, dissolves in sulfuric acid, but not in hydrochloric acid.

Is H2SO4 a Monoprotic acid?

The monoprotic acid is hydrobromic acid because only one proton (H) can be given. No monoprotic hydrogen exists. There are two acid protons in the starting acid, sulfuric acid (H2SO4). In other words, the sulfate molecule was bound to these acidic protons.

For a detailed discussion on preparation and uses of sulphuric acid, download Byju’s – the learning app.