It is observed that the content of sodium and potassium in a human body is more than iron and copper which tend to get the main focus in a human diet. These biologically important compounds perform a function of a power generator under the roof of a cell. They act as communicating agents to transmit information such as flexing of muscles etc.

For an instant, if you want to jump, these transmitters carry the information to the brain which gives the command to jump. Neurons used these ions for communicating the required information. The concentration of the ions varies on either side of the cell membrane. In the plasma the blood, potassium content is 5 mmolL-1, and sodium content is 143 mmol L-1.

Sodium ions are usually found at the surface of the cells in the blood plasma and interstitial fluids which acts as surrounding to the cell. These are mainly used to transmit information, in the transportation of the sugar and amino acids within the cell etc.

Potassium ions are a cation and they are present in the cell fluids. It is used to activate enzymes, oxidation of sugars and is also responsible for transmitting the information.

Role of Sodium And Potassium in conduction: 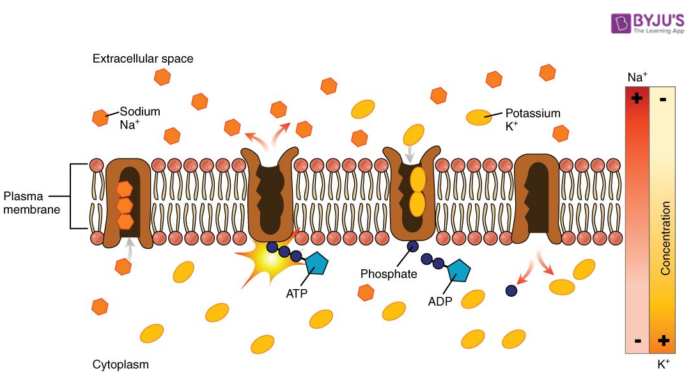 High consumption of sodium and low intake of potassium results in higher risk of death and heart diseases. Making the right choice in your food diet plays a very important role in a healthy body. Connect with the Byju’s mentor team to clear your doubts.

To learn more about the Preparation, Properties, and Uses of Sodium Chloride and more, register with BYJU’S now!