Introduction to the Components of Air

The mixture of gases that makes up the Earth’s atmosphere is known as air. Nitrogen makes up 78 % of this gas, which is mixed with oxygen (21%), water vapour (variable), argon (0.9 %), carbon dioxide (0.04%), and trace gases. There is no apparent scent or colour in pure air. Dust, pollen, and spores are common contaminants in the air; additional contaminants are referred to as “air pollution.” Because there is no air in space, the so-called air on another planet, such as Mars, would have a different composition.

We all know that air surrounds us everywhere on this planet. One cannot imagine the existence of life without air. Ever wondered what is air made up of? Is it a mixture or a pure substance? In ancient times, the air was thought to be a pure substance but was later found to be a mixture of many gases. The composition of air is not constant and changes from place to place. For example: in polluted areas, since emissions of carbon dioxide are very high therefore, they have the higher percentage of carbon dioxide. The main components of air are explained below: 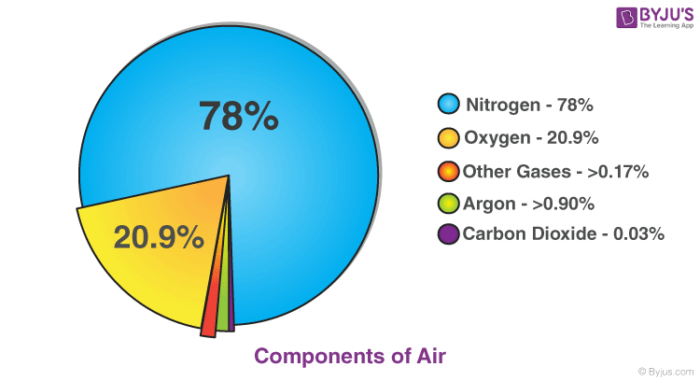 Water vapour: We know that water present in oceans and rivers evaporates during summer and escapes into the air. Thus water vapour is one of the components of the air. It occupies very less percentage of the earth’s atmosphere.

Oxygen: Have you ever tried to burn a candle in absence of air? If you would try you would notice that it doesn’t burn in absence of air. Air contains some matter which supports combustion. This substance is oxygen. Oxygen is one of the major components of air around us. Air comprises almost 21% oxygen.

Nitrogen: When you blow over a burning candle you notice that it extinguishes. This means air contains incombustible gases (gases which don’t support combustion) too. This is majorly due to the presence of nitrogen. Nitrogen occupies nearly 78% of the earth’s atmosphere and is the most abundant gas on our planet.

Carbon dioxide: Carbon dioxide is mainly produced due to respiration by plants and animals or the burning of fuel. It occupies 0.038% of the earth’s atmosphere. Its occupancy keeps on changing from one place to another in our atmosphere. 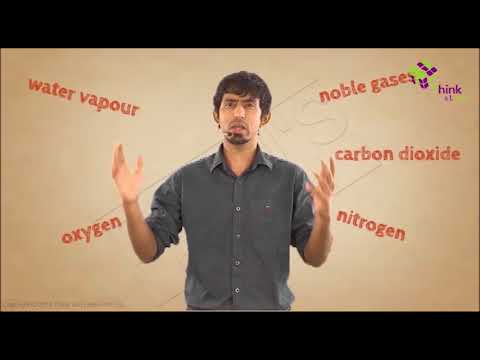 What is the air in chemistry?

Air is a mixture of a number of different gases. Nitrogen, oxygen, which is essential for animals and humans’ survival, carbon dioxide, water vapour, and trace amounts of other elements make up the atmosphere (argon, neon, etc.).

What type of mixture is air?

Air is a solution as well: it’s a homogeneous mixture of gaseous nitrogen solvent and oxygen, as well as smaller amounts of other gaseous solutes.

Where on earth do we find air?

Air can be found almost everywhere on the planet, except where there is water. Air can even be found in the earth’s surface layer, in the soil. Air is found not just on Earth, but also in the atmosphere, which is a layer of air that surrounds the planet. Depending on temperature and height, the atmosphere can be separated into layers. Straight borders do not clearly distinguish these lines; they eventually overflow one another.

What is air pressure?

The force that air exerts on objects is known as air pressure. As a result of the earth’s magnetic attraction force, all air in the atmosphere presses against it. Every item and life form on Earth, including tables, roofs, and houses, as well as humans, animals, and plants, is subjected to air pressure.

The term “wind” refers to air that is moving. The air moves as a result of many sorts of air pressure on the surface of the earth. Wind direction and force can be extremely variable. Cardinal points are a term used to describe wind force.

To learn more about different components of air download BYJU’S the learning app.

Test your Knowledge on Components of air!
Q5