What is Kolbe Reaction?

Kolbe reaction, also known as Kolbe Schmitt Reaction is a type of addition reaction named after Hermann Kolbe and Rudolf Schmitt. When phenol is treated with sodium hydroxide, phenoxide ion is generated. The phenoxide ion generated is more reactive than phenol towards electrophilic aromatic substitution reaction. Hence, it undergoes electrophilic substitution reaction with carbon dioxide, which is a weak electrophile. Ortho-hydroxybenzoic acid (salicylic acid) is formed as the primary product. This reaction is popularly known as Kolbe’s reaction.

An example of the Kolbe reaction (Kolbe Schmitt Reaction) is given below:

The mechanism of Kolbe reaction proceeds through the nucleophilic addition of phenoxide to carbon dioxide, yielding the salicylate.

The salicylate formed further reacts with the acid to form salicylic acid. It is a carboxylation reaction where sodium phenoxide is heated with carbon dioxide under a pressure of 100 atmospheres and a temperature of 125 degrees Celsius, and the resulting product is treated with sulfuric acid to yield salicylic acid (an aromatic hydroxy acid).

The Kolbe reaction can be classified as a carboxylation chemical reaction. The reaction occurs when sodium phenoxide is allowed to absorb carbon dioxide and the resulting product is heated at a temperature of a 125-degree celsius and a pressure of over a hundred atmospheres. An unstable intermediate is now formed.

This unstable intermediate goes through a proton shift, leading to the formation of sodium salicylate. Now, this mixture is treated with sulfuric acid. The acidification of the mixture yields the salicylic acid. The illustration for the Kolbe reaction mechanism is given below: 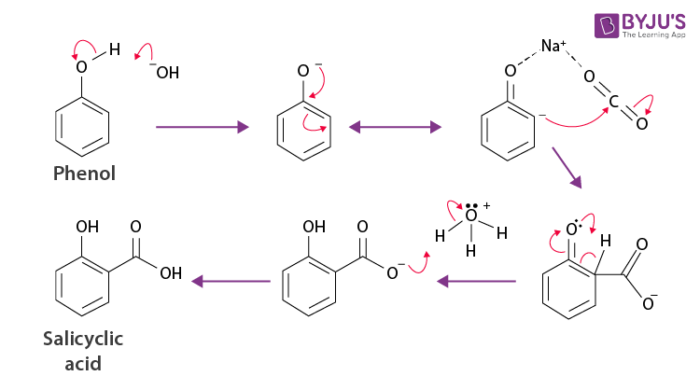 Thus, the required aromatic hydroxy acid – salicylic acid is produced via the Kolbe reaction. It can be observed that there is a nucleophilic addition of sodium phenoxide to carbon dioxide gas to form the salicylate in the mechanism.

Can Kolbe reaction be used for converting sodium acetate to ethane?

Why do true aromatic acids reluctant to Kolbe’s electrolytic reaction?

The reason why true aromatic acids do not undergo Kolbe’s electrolytic reaction is that if we take aromatic carboxylic acid, the carboxyl group is attached to the benzene ring. This makes it difficult to lose CO2.

Why sodium salicylate is a major product in Kolbe reaction?

The Kolbe reaction, in general, is a carboxylation chemical reaction which converts phenols to salicylate. However, we obtain sodium salicylate mainly due to the proton shift or the nucleophilic addition of a phenoxide, classically sodium phenoxide to carbon dioxide.

Is Kolbe synthesis same as Kolbe reaction or Kolbe electrolysis?

Yes, all the terms mean the same thing. The names are used interchangeably. Sometimes, Kolbe–Schmitt reaction or Kolbe process is also used.