Ziegler–Natta catalyst is a type of catalyst made from a mixture of chemical compounds that are mainly used in the synthesis of polymers belonging to 1-alkenes such as alpha-olefins which are hydrocarbons containing a double carbon-carbon bond.

The Discovery Of The Catalyst

A German chemist named Karl Ziegler in the year 1950 first demonstrated the use of the catalyst during the polymerisation of ethylene. His catalyst consisted of a mixture of an alkyl derivative of aluminium and titanium tetrachloride. While the reaction proved to be a success, the method was extended to other olefins by an Italian chemist known as Giulio Natta. Based on his research on the mechanism of polymerisation he further developed different variations of the catalyst.

However, the primary mechanism of their catalysts was that it facilitated the synthesis of stereospecific, unbranched polyolefins with high molecular weight. As a result of their work, Ziegler and Natta were awarded the Nobel Prize in 1963.

To prepare or obtain Ziegler-Natta catalysts, transition metal halides belonging to groups IV-VIII are generally reacted with organometallic compounds that belong to groups I – III in the modern periodic table. One common example is a mixture of titanium tetrachloride (TiCl4) and trimethylaluminum (Al(C2H5)3). The catalysts have been proven to be very useful.

Ziegler–Natta catalysts that are employed are mainly of two broad categories and are clearly distinguished based on their solubility. The catalysts are;

The Ziegler-Natta catalyst involves reactions that are seen in coordination polymerisations which generally include complexes that are formed between a transition metal and the π electrons of a monomer. Polymerisation usually takes place by insertion of monomers where the transition metal ions are attached to the end of the growing chain. The incoming monomers are simultaneously coordinated at vacant orbital sites, and there is a formation of long polymer chains. The C=C bond is also inserted into the Ti−C bond at the active centre. The chain-growth polymerisation finally enters into the final termination step where “dead” polymers (desired product) are formed. These reactions also resemble anionic polymerisation that lead to the formation of linear and stereo-regular polymers. 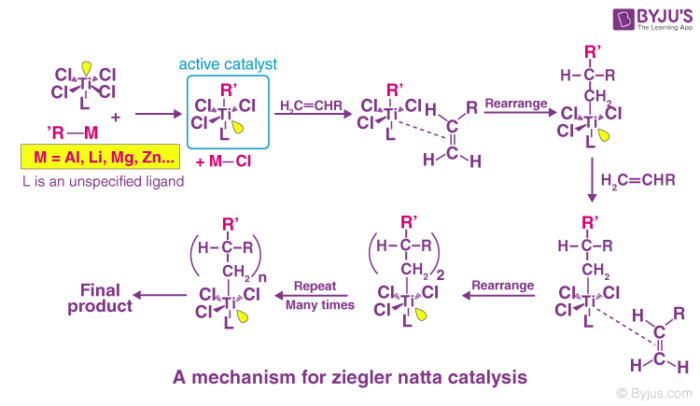 The Ziegler-Natta catalyst polymerisation is a beneficial and versatile reaction for producing polymers. Some of the most popular applications of this catalyst are;

They are used for the production of High and Low-Density Polyethylene.