Most of the transition elements exhibit the typical metallic properties such as lustre, malleability, ductility, high tensile strength, high thermal and electrical conductivity, etc. We have Zn, Cd, Hg and Mn which are exceptions in this case; the rest of the elements show one or more metallic characters at normal temperatures. Apart from the metals which are exceptions, the rest of the elements are hard and possess low volatility. 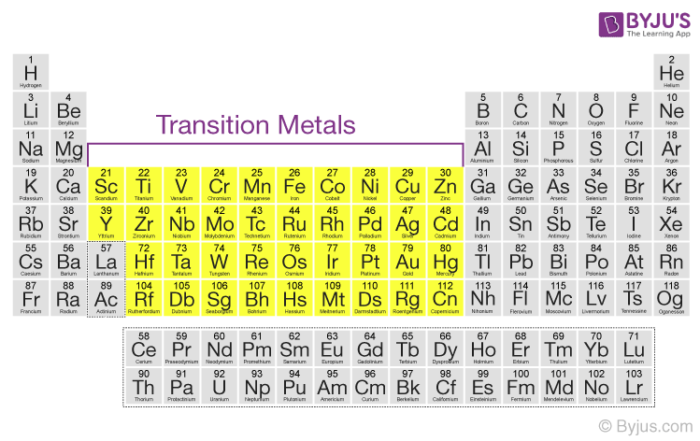 Transition elements show metallic character as they have low ionisation energies and have several vacant orbitals in their outermost shell. This property favours the formation of metallic bonds in the transition metals, and so they exhibit typical metallic properties. These metals are hard which indicates the presence of covalent bonds. This happens because transition metals have unpaired d-electrons. The d-orbital which contains the unpaired electrons may overlap and form covalent bonds. The higher the number of unpaired electrons present in the transition metals, the more the number of covalent bonds formed by them. This further increases the hardness of the metal and its strength.

The metal’s chromium (Cr), tungsten (W) and molybdenum (Mo) have maximum number of unpaired d-electrons. Therefore, these transition metals are very hard. On the other hand, we have zinc (Zn), cadmium (Cd) and mercury (Hg) which are not very hard as they do not possess unpaired d-electrons. The transition elements are very hard and possess metallic character; this indicates that both metallic and covalent bonding exists together in these elements.

We have seen the metallic character of transition elements and the reasons for this property. For any further query kindly install BYJU’S the learning app and enjoy the journey of learning in the unique and simplified way.