What is Dispersion forces?

Dispersion forces are the weakest intermolecular attractive forces. The existence of dispersion forces accounts for the fact that low-molecular weight, non-polar substances, such as hydrogen (H2), Neon (Ne), and methane (CH4) can be liquified.

To visualize the origin of dispersion forces, it is necessary to think in terms of the instantaneous distribution of electron density rather than average distribution.

For example, consider neon which is a gas at room temperature.

Characteristic and Effect of Dispersion Force

Since covalent bonds are formed by equal sharing of electrons, therefore, there must be no charge on both sides of the molecule but because of the high electronegativity of chlorine, the bonding electrons shifted towards chlorine atom. This partial shifting creates a partial negative charge on chlorine atom and the partial positive charge on hydrogen. Due to these partial charges on both poles of molecules, they attract each other and have weak interaction forces between molecules.

On the contrary, in non-polar molecules like chlorine molecule, the bonding electrons are placed exactly at the centre of the bond. Therefore there is no partial charge over the molecule. Then how these molecules will attract each other, Or there will be no interaction between molecules. The force of attraction between nonpolar molecules is known as dispersion forces.

The distribution of electron density is symmetrical in neon and there is no dipole moment in neon. However, at any instant, there is a non-zero probability that its electron density will be polarized more toward one part of the atom than toward another.

For example, the difference in boiling point due to the dispersion forces for hexane and 2,2-dimethyl butane are shown below. 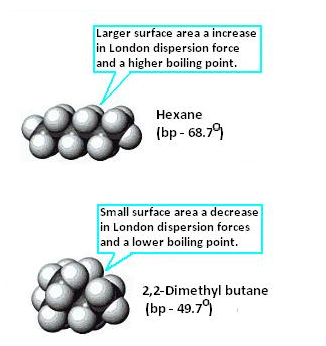 The boiling point of some five isomeric alkanes within the molecular formula C6H14 are listed below.