With respect to a reaction, Gibbs energy can be related to the equilibrium constant as:

Where K is the equilibrium constant.

Thus, when the reaction is exothermic, enthalpy of the system is negative, thus making Gibbs free energy negative. Hence, we can say that the reaction will proceed in the forward direction due to a positive value of the equilibrium constant. This law can be scaled for two different reactions taking place in a system too.  The overall reaction (combination of two reactions) will occur if and only if net ΔG (sum of ΔG’s of both the reactions) of the two possible reactions is negative.

Ellingham diagram for Reduction of Oxides: 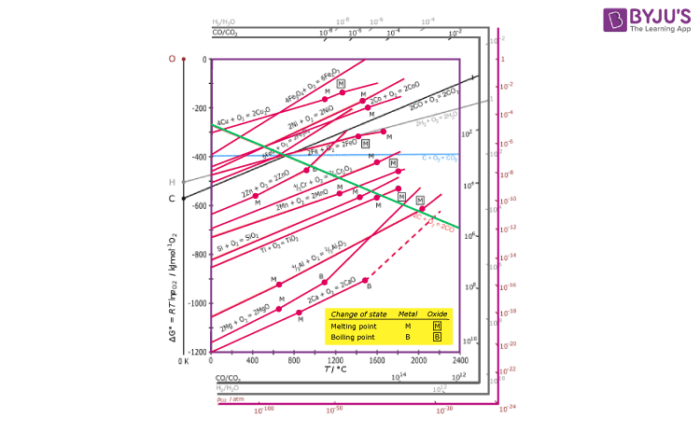 As is evident from the reaction, the gaseous amount of reactant is decreasing from left to right as the product formed is solid metal oxide on the right side. Hence, we can say that molecular randomness is also decreasing from left to right. Thus, ΔS is negative and ΔG shifts towards higher side despite rising T. Hence, for most of the reactions shown above for the formation of MxO (s), the curve is positive.